Due diligence requires companies to identify, address and remedy their impact on human rights and the environment throughout their value chain
Rules should apply to companies operating in EU internal market, including those from outside the EU
Sanctions for non-compliance and legal support for victims of corporations in third countries
Ban on import of products linked to severe human rights violations such as forced or child labour

Parliament paves the way for a new EU law that requires companies to address human rights and environmental standards within their value chains.

The legislative initiative report (adopted on Wednesday by 504 votes in favour, 79 against and 112 abstention) calls for the urgent adoption of a binding EU law that ensures companies are held accountable and liable when they harm – or contribute to harming – human rights, the environment and good governance. It must also guarantee that victims can access legal remedies. The Commission has announced it will present its legislative proposal on the matter later this year.

Binding EU due diligence rules would oblige companies to identify, address and remedy aspects of their value chain (all operations, direct or indirect business relations, investment chains) that could or do infringe on human rights (including social, trade union and labour rights), the environment (contributing to climate change or deforestation, for example) and good governance (such as corruption and bribery).

MEPs stress that due diligence is primarily a preventative instrument that requires companies to take proportionate measures based on the likelihood and severity of the impact, the sector of activity, the size and length of the value chain and size of the undertaking.

Bringing about change beyond EU borders

Companies that want to access the EU internal market, including those established outside the EU, would have to prove that they comply with environmental and human rights due diligence obligations.

Parliament calls for additional measures, including a ban on importing products linked to severe human rights violations such as forced or child labour. EU trade agreements should include these aims in their trade and sustainable development chapters. MEPs also ask the Commission to thoroughly review whether companies based in Xinjiang exporting to the EU are involved in human rights breaches, especially those related to repression of Uighurs.

In order to guarantee effective reparations for victims, companies should be held liable for their actions and be fined for causing harm or contributing to it, unless they can prove that they have acted in line with due diligence obligations and taken measures to prevent such harm. The rights of victims or stakeholders in third countries – who are especially vulnerable – would also be better protected, as they would be able to take companies to court under EU law.

Broad scope and help for SMEs

To create a level playing field, the future legislative framework on due diligence should be broad and apply to all large undertakings governed by EU law or established in the European Union, including those providing financial services. The rules should also apply to publicly listed SMEs and high-risk SMEs, which should receive technical assistance to comply with the requirements. 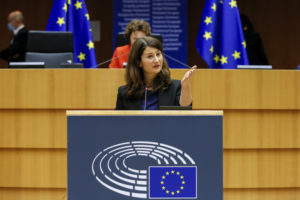 “This new law on corporate due diligence will set the standard for responsible business conduct in Europe and beyond. We refuse to accept that deforestation or forced labour are part of global supply chains. Companies will have to avoid and address harm done to people and planet in their supply chains.The new rules will give victims a legal right to access support and to seek reparations, and will ensure fairness, a level playing field and legal clarity for all businesses, workers and consumers”.

At the moment, that is far too difficult, and if you think about it, this is entirely non—intuitive. If a regular citizen breaks someone’s window, even accidentally, I can assure you they have no smokescreens to hide behind. But in international law there are plenty. While a large company has the resources and the brightest legal minds at its disposal, those affected often lack the money and means to seek remedy.

We live in a world in which businesses so inclined can still shift their adverse social and environmental impacts to the most vulnerable people and places on the planet. And on International Women’s Day I cannot help but notice that these impacts are not gender neutral: women face a higher likelihood of poverty, sexual abuse and violence within the supply chains that we are now talking about.

One of the problems is that in a global economy doing the right thing does not give a business a competitive advantage. And I refuse to believe that that is something we simply have to accept – that deforestation or forced labour are part and parcel of global supply chains. What we’re dealing with here is a lack of commonly enforced rules for responsible business conduct and the absence of a framework for supply-chain liability.

Do you think you can meet the expectations of today’s society?

It is no surprise that the debate on this has become more prominent through the years. The UN and the OECD have courageously led the hard-fought development of guidance for businesses and pushed the envelope. But the time for voluntary standards is now over. According to a recent survey by the Commission only a third of respondents said that some form of due diligence was carried out. That same study showed that a majority of businesses recognise the value of new EU rules. Indeed, let’s not forget the thousands of businesses that are already doing the right thing but that do not feel supported by current rules.

Those businesses understand that mandatory standards are the only path to a level playing field and to business certainty. They also understand that modern consumers have high standards, and that doing business in the 21st century means doing business responsibly. All of this is why, over the past few months, we have been working on an ambitious law that would apply to anyone wanting to sell their goods or services on the internal market, including non-EU companies.

Will this law be feasible for the companies concerned?

That law requires of companies their best efforts to identify and address adverse impacts on human rights, the environment and governance, and this in their entire value chain, inside and outside the Union. The agreement we reached ensures the involvement of NGOs and local communities, and stresses the role of trade unions.

For us to transform supply chains in a meaningful way, due diligence should be exercised by all companies with risks in their supply chain. But we have paid special attention to SMEs and included only those that do face risks or are listed on the stock exchange. Obligations should be proportional and reasonable, meaning smaller companies should do what can reasonably be expected of them, in accordance with their means.

Should SMEs be excluded from the process?

But exempting SMEs altogether flies in the face of our joint goals. A small company can cause harm too. And so it is risks rather than size we should focus on. Yes, the rules should be workable, SMEs have indeed come to tell me that, and I agree with them. But they have not come to ask me for an exemption, since they know that that could have a chilling effect on their business. They are often part of the supply chains of larger companies and they would risk being cut out. An exemption would also make it harder once SMEs grow or want to secure financing for growth and I therefore urge Members to vote against the amendment seeking to exempt SMEs.

The European Parliament has the chance this week to become a leader in responsible business conduct. For businesses, we are creating a level playing field and legal clarity. For consumers, we are ensuring fair products. For workers, we are enhancing protection. For victims we are improving access to justice. And for the environment, we are taking a step that is very long overdue