Presentation of the FICT, its history, qualifications and the key figures of its activity

Created in 1924, the FICT, Federation of Industrial Charcuterie Caterers, is the spokesperson of the French meat-processing industries.
Its mission is to promote and defend the interests of processed and cured meats catering companies established in metropolitan France and overseas regardless of their size and legal status (NAF codes 1013A / 1085Z / 1011Z).

The FICT represents 310 processed meat businesses spread over the whole of France, more than 90% of which are SMEs. 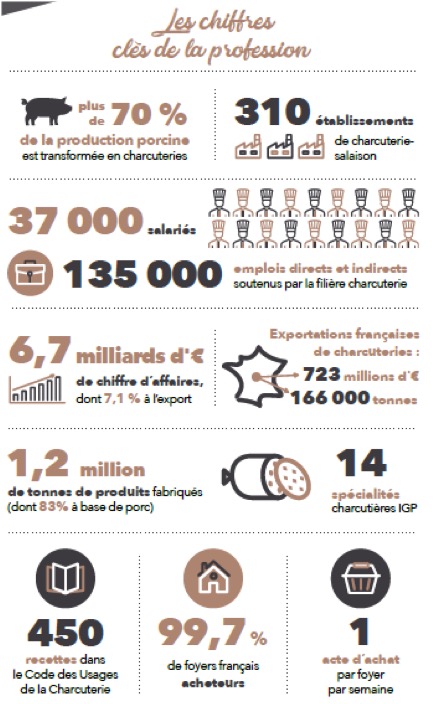 Governance and management of the FICT

The FICT, chaired by Bernard Vallat, is governed by a 32-member Steering Committee.

The FICT is composed of 10 people and has 3 missions:

The FICT thus has expertise in the following areas: 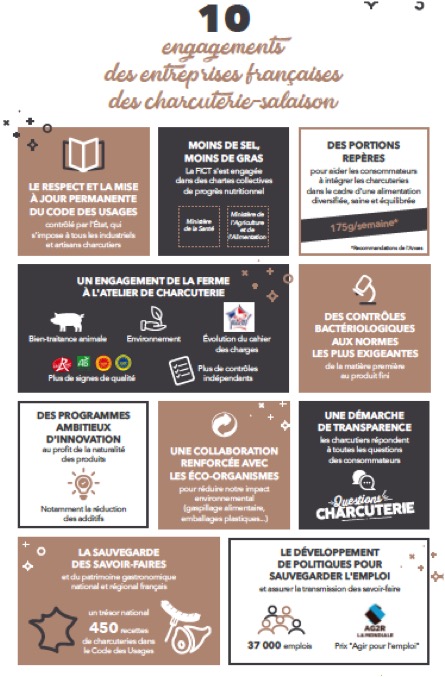 With 450 specialties, French charcuterie is the expression of a centuries-old art of living, preaching pleasure, sharing and conviviality. It reflects a know-how of excellence, an integral part of the French gastronomic heritage and one that is commited to the terroirs.

Since 1969, the Code of Uses of Charcuterie indentifies all these specialties and codifies the practices of a whole profession whether it is craft or industrial.

It helps to ensure the durability of traditional denominations, while leaving the field open to innovation, to the evolution of production techniques and the tastes of consumers.

Quality is an essential value for French processed meat companies. To ensure the absolute safety of the products, they rigorously select their suppliers and carry out regular audits by independent organizations in order to control the quality of the products, and this, at all levels of their life cycle.

To promote the profession of meat processors and to bring the safety and quality of charcuterie to the highest possible level, the Association for the Development of the Code of Uses of Processed and Preserves of Meat (A-CDU-SCCV) – bringing together the National Confederation of Meat Processors – Caterers (CNCT) and the French Federation of Industrial Charcuterie, Caterers, Meat Processors (FICT) – decided to create, in May 2011, the label “Savoir-Faire Charcutier Français” (“French Charcuterie Know-How”). Affixed to high quality products that are traditional and old-fashioned, which comply with the Code of Usages and certain quality criteria, this label guarantees the best practices in the profession.

Background of the platform “Charcuterie Questions”

In a context where the French are asking themselves many questions about their food and aspire to become more savvy consumers, the agri-food industry is being met with much distrust from them.

Charcuterie is no exception and is now an integral part of the long-awaited “healthy eating” debate. There is a risk of a breach of trust that professionals in the sector are aware of. For Bernard Vallat, President of the FICT, “it was urgent to restore a direct chat channel between professionals and consumers who aspire to be reconciled with charcuterie for it is a wide range of products rooted in their culinary traditions.”

The charcuterie professionals assembled within the FICT have therefore decided to react by engaging in a direct dialogue with their consumers. A dialogue that materializes with a new interactive platform dedicated to them: “Charcuterie Questions”, on the website www.lescharcuteries.fr 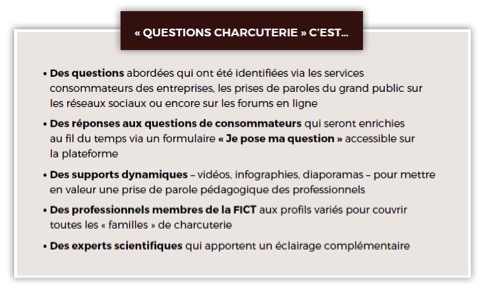 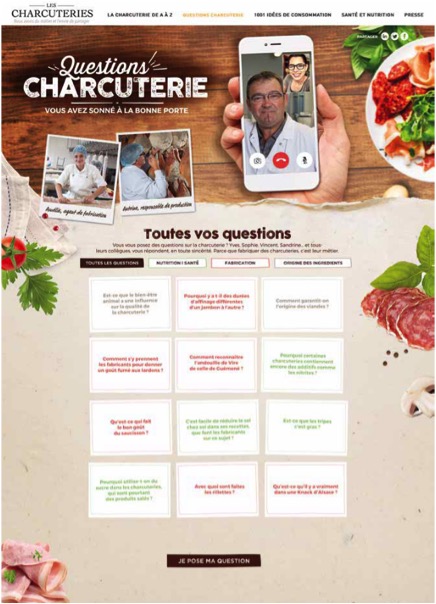 The FICT has decided to provide benchmarks but also elements of understanding that allow consumers to integrate charcuterie in a balanced consumption pattern, in accordance with public health recommendations.

For this, a dedicated module titled “Well Balanced Ideas” has been deployed on the platform: the recommended consumption thresholds are contextualized and made concrete to better guide the consumer.

Benchmarks make it possible to promote an enlightened, reasonable use in a spirit fully compatible with the idea of “eating everything in reasonable quantity”.

The FICT’s export strategy in the years to come

In a difficult national context, the markets of the European Union and third countries are an important source of growth for companies.

Bernard Vallat recalls “Our efforts also focus on export support, a subject that has become essential for the development of our businesses. A reorganization of our teams was initiated for this purpose and new inter-sectoral alliances were made. Specific promotional programs in Japan and Canada are underway and a program for Hong Kong is in preparation.”

Supporting negotiations for the opening of third country markets:

Many markets are open to French charcuterie. Recognizing that some high-potential markets are still difficult to access, the FICT is expanding its support for health negotiations thus allowing them to open markets. In 2018, the FICT helped obtain new approvals with a simplified protocol so as to allow companies to expand their presence in Japan. In close collaboration with public authorities, the FICT continues to strongly support the ongoing negotiations to obtain new Chinese approvals, open the Mexican market more widely and find a solution allowing access to the Russian Kazakh and Australian markets. The FICT remains mobilized and closely follows other markets to make the approach more fluid.

The FICT has implemented large-scale promotion actions in Japan. With a budget of more than one million euros, 80% of which is financed by the European Union, actions are organized for importers, restaurateurs, distributors and local opinion makers. Several seminars were held in Tokyo and Osaka, films to promote the value of all French charctuerie products were shot in 6 regions, advertisements were broadcast in newspapers, digital press and social networks.

The FICT has also taken European funds to carry out promotional activities in Canada from 2019 to 2021, for a total amount of 600,000 euros, 80% of which is financed by the European Union.