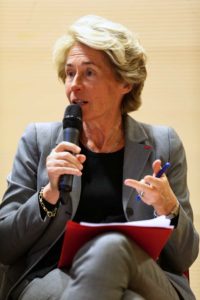 The Villes de France association is an association of elected representatives from the cities and intercommunities that make up the urban fabric of our country. The cities we represent comprise between 10,000 and 100,000 inhabitants and form a bridge between big cities and rural territories. Our elected representatives are motivated by a desire of alliance between the regions without which our country will always be fractured. Medium-sized cities are what make up France today; they are prefecture cities, sub-prefecture cities with remarkable heritage, cities that innovate, evolve, and modernize, powerhouse cities of the Republic.

For 30 years, our association has been defending the interests of these territories. The role of our association is to serve communities that join us, to relay questions and concerns, and to come up with appropriate proposals that are heard and, as often as possible, listened to. Three essential missions are carried out: actions aimed at influencing French and European institutions through ministerial hearings, the defense of amendments in major legislation and the participation in dialogue bodies; the networking of our elected members including through our annual Congress, our local intelligence meetings and the working groups of our idea laboratory; and finally, an analysis and information sharing project conducted via our weekly Ondes Urbaines newsletter, our observatories and our publications.

Our association works on all urban issues such as local finance, urban planning, transport, housing, sustainable development… It is in line with a dialogue process both constructive and demanding with the partners of the regions.

In early 2019, Villes de France launched a regional survey with the support of the Regional Bank, conducted by the IPSOS Institute. 1,600 French people polled on the vision they have of the region in which they live and the actors most likely to make it evolve. Our survey revealed that 43% of French people would prefer to live in a medium-sized city. Our cities have a remarkable heritage, they offer a quality living environment, and are often cities in the countryside. The medium-sized city is a regional city of balance but also a city where life is good, a human city, an innovative city, a city of the future.

Villes de France and its members have worked for several years on the theme of the revitalization of city centres. The association has co-constructed the Coeur de Ville program with the Ministry which will allow, with a budget of 5 billion euros over 5 years, to associate different regional partners to carry out ambitious and varied projects within the theme of revitalizing city centres. This program essentially covers housing, mobility and digital issues. 222 cities were selected and our association expressed interest in further involvement on other key issues for our cities such as cultural dynamism, local higher education and proper health services.

This program is to be compared with the Territoires d’Industrie project, which also allows 124 regions in difficulty to think about their future economic development despite the fact that the industrial sector has undergone a profound change. For some regions, a strategy of attractiveness and economic reconversion is a prerequisite for the revitalization of city centres. The developments we are carrying out at the scale of our centre of population must be considered in a global manner.

One of the key issues for medium-sized cities is accessibility. As such, a balanced regional development implies preserving smaller railway lines, whose shutting down would have serious consequences (economic, social, environmental…), with an inevitable downgrading of the cities concerned and their surrounding rural regions, and a rapid rise in the sense of population relegation. These mobility issues have been at the origin of the so-called yellow vests movement and must therefore be thought of in the equality between regions.

Finally, a last challenge for the future of our medium-sized cities and their intercommunalities is to be part of ecological and digital transitions. Our cities generate less congestion problems than big cities but are involved in the current trends of decentralization of energy, agriculture that pays due regard to the environment and soft mobility. Likewise, we cannot miss out on the digital transition and the opportunities it brings whilst protecting ourselves from its pitfalls, particularly in terms of data protection.