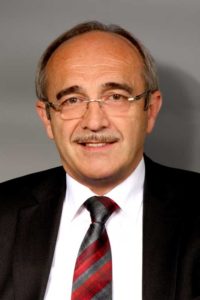 What are the main issues related to cross-border policy?

Every day, thousands of people along the borders, and especially in Eastern Moselle, cross the borders for different reasons: for work, consumption of goods and services, health, tourism or culture. For this to be possible, there is necessarily the question of learning the neighbour’s language (bilingualism or even plurilingualism), and public services including transport. Cross-border territories are “living areas” in which the population don’t want any barrier.

Who are the actors and what is the role of each?

In the field of cooperation, the actors are numerous: the State, regions, departments, intercommunalities and municipalities, each at its level of competence. This millefeuille is not made to simplify local projects, especially since France is still very attached to its Parisian Jacobinism. This is partly the challenge of the Treaty of Aix-la-Chapelle (January 22, 2019) as of those that preceded it. This is also the aim of the cross-border mechanism proposed by the European Parliament in the context of its reflections on the post-2020 cohesion policy.

The cross-border concern required the creation of territorial cooperation structures capable of developing joint actions on both sides of borders. On our territory, we have created a European Group of Territorial Cooperation (GECT) SaarMoselle which exists since 2010 and whose mission is to develop projects to foster the interaction between inhabitants, associations and regional actors as well as to create synergies between Moselle and Saar to eventually become a territory of excellence for Franco-German cooperation. This group deals with matters such as economic development, tourism, health, social cohesion and mobility.

But let us not forget that citizens are mobilizing to build relationships with their neighbours. These actions are mostly in the non-profit world (cultural actions mainly) or are economic when one is an entrepreneur or has development responsibilities.

More precisely in your city, what are the projects set up as part of your cross-border territorial policy? And what are the obstacles that you encounter?

In Forbach and Eastern Moselle, we work on many economic, health, employment, training and cultural issues.

For example, we have successfully implemented a cardiology emergency agreement since 2013 with the Marie-Madeleine de Forbach hospital and the cardiological centre Völklingen in Germany. In this case, the goal was to reduce the time for patient management to treat the cardiac emergency. It took us many years to achieve this. Since then, we have been working on another health convention aimed at creating a “cross-border access organization area” of general competence. As discussions progressed, it became a sectoral agreement. In this area, concrete progress is difficult to obtain because of the multiplicity of actors, the differences in regulations and medical procedures, and the problems of reimbursement of medical expenses. The political will is present yet these constraints continue to restrain its realization.

Cross-border transport is another example of concrete realization on our territory. The Eurodistrict thus carries a “Sarre-Moselle ticketing” project supported by the INTERREG VA program, which aims to facilitate an end-to-end cross-border trip to the heart of Europe with a single travel pass, regardless of the mode used or country of origin. The main purpose is to enhance the attractiveness of cross-border lines within the Greater Region. In concrete terms, the aim is to manage multimodality through the interoperability of ticketing systems.

Another major issue in border territories is training. Associated to this are, on the one hand, diploma recognition problems, and, on the other hand, that of standards. In the case of Eastern Moselle, for example, a BTS diploma has no equivalent in Saar. This is a problem because there are many vacancies in companies and industries in Saar, our workers are competent but we do not have the same interpretive guides. In another area, the nursing profession doesn’t allow for the same activities in France and in Saar which is an important constraint when it comes to recruitment on both sides of the border. In the first case, French institutions agree with major Saar groups to set up internships and allow the award of an internal diploma to facilitate recruitment. As far as the nursing profession is concerned, a system of internships in the neighbour country has been set up in order to perfect the linguistic skills and to master the intervention framework in the neighbouring country. It will, however, be necessary to harmonize certain things so that there can be full mobility.

Eastern Moselle is experiencing a real paradox: it is a territory that has experienced annexation and two world wars and a significant part of the population is voting against the construction of Europe. Cooperation must become more concrete and reactive than ever before to solve what is now commonly called the irritants of everyday life. For us, the question of a cross-border metropolis is resolutely posed with the need for a right to experimentation and differentiation to be closer to the needs of our populations. This construction must further engage citizens so that they can feel fully concerned.