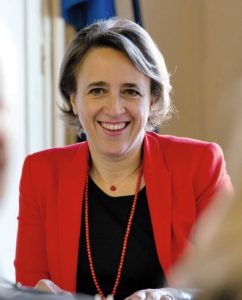 Albi is happy and proud to host the National Congress of the “Villes de France” association less than a year from the renewal of our local executives and in an enabling environment for the demands of our territories. This is evidenced by our elected colleagues’ significant participation in our work, as well as that of our network’s partners and the members of the government, starting with our Prime Minister who wanted to express his appreciation for the work of local elected representatives.

The Albigensian is a formidable field of strategic experimentation in many areas. Located in the metropolitan area of Toulouse, with a population of some 83,000 in a living area of more than 160,000, the Albigensian agglomeration is a territory of balance between metropolis and rurality, a growing territory and “at the heart of many exchanges”, as INSEE pointed out in its latest report.

City of heritage and culture, Albi also attracts people due to the dynamism of its economy. Its tourist attraction is of 1.3 million visitors per year. Its tertiary and industrial attraction is even more important, especially around the sector of the future which revolves around hydrogen. Mostly, its attractiveness is largely stimulated by higher education opportunities and a commitment to excellence.

A sustainable and connected city, the capital of biodiversity, Albi also appears at the cutting edge of the essential issues of urban agriculture and short food chains.

During your stay, you will have the opportunity to discover, or rediscover, the city of Lapérouse, Toulouse-Lautrec and Jaurès, as you wander at the centre of our episcopal city listed by UNESCO on the World Heritage List in 2010.
“Ville de France” speaks for our human-scale cities, characterized by humanitarianism. By bringing together elected representatives from all political persuasions that share common concerns and mutually enrich each other with their best practices, “Villes de France” demonstrates that we can be the major and constructive actors of a new land-use planning national policy.

Together, our communities are stronger and more representative, aware of their central role in ensuring a real cohesion of territories around an ambitious policy of access to culture, high-quality care and appropriate means of transportation while integrating undoubted imperatives of a sustainable development in a preserved environment.

I thank Caroline Cayeux, President of “Villes de France”, who manages our network with talent, generosity and enthusiasm. I thank her and my colleagues and friends from the office for having selected Albi to organize this important congress. This is a beautiful vote of confidence.   The choice of the theme topic for our congress: “Enhancing the quality of daily life in the cities of France” opens up very broad perspectives for exchanges and debates on issues as crucial as commercial attractiveness (due to the implementation of the action plan Coeur de France), cities, our communities’ financial autonomy, the city-metropolis link, training and higher education.
There are so many issues that are indeed our ever-present concerns as local elected representatives. There is no doubt that our Congress will be a centrepiece that will have repercussions throughout the country and that it will assist the cause of our communities.

The Albigeois is a land of welcome; Albigensians have the sense of hospitality with a strong sense of belonging to an exceptional territory. “Villes de France” feels at home, brought together. What a beautiful image!

Excellent congress to all.