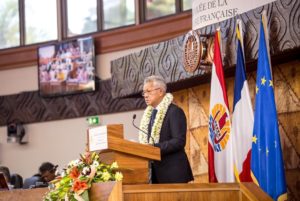 Our islands are facing a major climatic challenge which is now clear for everyone to see. This major challenge, whose entirety and intensity is sometimes extremely difficult to measure, is an increasingly obvious reality for the 118 islands of our vast territory. There is an exponentiation of natural disasters as well as an increase in their intensity and recurrence.
Thus the question arises: In this era of major environmental changes that call for a transformation of our lifestyles, how can we guarantee optimal living conditions for the population of the islands of Polynesia? How can we prevent them from being isolated, without help and resources in the event of a major disaster? Also, how can we prevent this from impacting our economy, which is already sensitive to the upheavals of different geopolitical contexts?
I am confident that with the daily commitment of each community, we will to find coordinated responses to the constantly increasing threats.
Fortunately, community involvement is natural in French Polynesia. Our population is by nature, and historically, resilient. This trait has been passed down to us by our ancestors. After generations of sailing the vast Pacific Ocean, they reached the shore and discovered new lands to populate. Over the centuries, they developed a natural resilience due to the need to adapt to an environment with limited space and resources. Despite those challenges, they managed to develop a prosperous civilization which survived right up to today.
My experience as President of the Assembly of French Polynesia, Mayor of Bora Bora and the many functions that I have had the honor to occupy at country level for the last 30 years, has led me to believe that public action is clearly a key element in our support network.
The Assembly of French Polynesia is a major and essential player in the locally developed energy and climate change adaptation strategy.
The reason behind this is that the Assembly of French Polynesia is where the defining and approving of the country’s energy policy is made. Legislative committees play a fundamental role because they are a place of dialogue for the actors concerned. They are also a place of exchange with the government in terms of the energy strategy and the definition of all the necessary regulatory tools.
This requires both the preparation of a general framework and the implementation of fiscal measures. The general framework should aim at ambitious objectives with regard to the use of renewable energy in the near future and the fiscal measures must encourage development and innovation in the energy sector.
In this regard, French Polynesia is already an example to follow with more than 30% of its electricity produced via renewable sources. However, this means that a much more ambitious energy future should be sought. French Polynesia intends to develop a range of innovative solutions that meet the requirements of a future where energy will be found in multiple channels rather than depending on a single source of production. This applies even more in an island environment such as ours.
Climatically, it is exemplarity and instructional work that will set the country on a progressive and effective path, even more than the implementation of ambitious rules in terms of preserving ecosystems and preparing for future changes.
Indeed, it is behavioral changes regarding consumption and lifestyles that will be key elements for our communities in the future. Subsidies and other possible arrangements will not be sufficient if all the actors concerned do not mutually agree to change and improve their practices.
We are now at the stage where the adaptation of our societies becomes a priority ahead of the inexorable fight against climate change.
These behavioral changes must above all be adopted by the representatives of the people so as to lead the way, reduce fears and positively influence our fellow citizens. This is how the Assembly embarked on a policy of paperless processes of parliamentary documents in an attempt to minimize the number of printing papers. Similarly, in 2019 we launched a policy to reduce plastic waste by distributing alu-bottles to all elected officials.
Changes are often lengthy and laborious. But when changes are initiated by leaders, they are inspiring and more easily assimilated by the citizens who, in turn, are more likely to follow the movement.
Our institutions are facing a major challenge, but it is equally exciting for us, elected officials, as it positions us at the heart of possible solutions. We are heirs to a long tradition and ancestral culture of resilience and adaptation, and I am confident in the ability of Polynesian elected officials to meet this noble challenge. 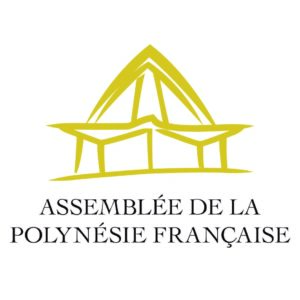