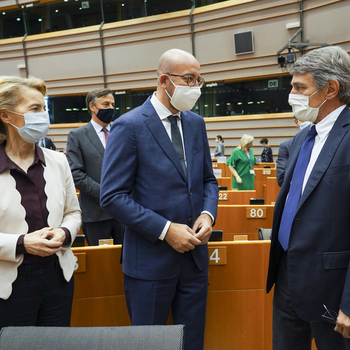 Renew Europe welcomes the Recovery instrument agreed by the European Council. The Instrument is a formidable symbol of EU solidarity and a much-needed economic stimulus. In May, our group led talks on the resolution calling for the creation of such instrument. We will now work on improving the governance of the EU’s recovery tools and give elected representatives a clear oversight on how they are used.

On the long-term EU budget, Renew Europe calls for the provisional agreement of the European Council to be built on. We will negotiate with the next generation in mind and fight to beef up Erasmus and programmes in health, digital, research, innovation and green technologies. We must also fight for our values. We will work to ensure EU funds are conditional on adherence to the rule of law, applicable to all Member States equally. Renew Europe will push for a mechanism that cannot be blocked by a minority of illiberal governments.

Renew Europe supports a clear and binding timeline for the creation of new EU – wide streams of revenue or ‘own – resources’ to repay the debt raised by the recovery instrument. We demand the introduction of at least two new own resources as of 2021. If we do not do so, national governments will have to pick the tab. We will not let that happen. The money to finance the recovery should be sourced from the pockets of tech giants, big polluters and tax dodgers – not EU citizens. In keeping with the resolution, set to be adopted by MEPs today, we call on the Council and the Commission to engage in meaningful negotiations on these priorities, in order for Renew Europe to be able to grant its consent to the 2021-2027 MFF.

Commenting ahead of the adoption of a cross – party resolution on the outcome of the EU Summit, Dacian Cioloş, President of Renew Europe said:

‘The agreement of the recovery fund, a proposal of Renew Europe, is highly welcome and lays the foundation for unprecedented European solidarity now and in the future. An inter – institutional agreement to secure a governance role for the European Parliament is now vital to ensure the democratic legitimacy of this fund over time.’

‘On the EU budget, nothing is agreed until everything is agreed. There is a clear majority in the European Parliament for improvements to ensure vital European programmes are reinforced, for example on Digital, the Erasmus and Horizon programmes. On the rule of law, we need a mechanism to build on the aims of the Council. A strategy needs to be put in place and clear timeline on new own resources, so that the recovery instrument can be funded without an additional burden being placed on taxpayers. In order to make Europe stronger and more resilient, the Conference on the Future of Europe needs to be progressed urgently.’

“Already proposed in May 2020 by the European Parliament, the Recovery Plan is an unprecedented and massive step towards a more integrated Europe. Through this vote, we are now opening the negotiations with the Member States to find an agreement on the ordinary budget. My main objective for Renew Europe will be to ensure that new own resources will really be introduced in the years to come through binding commitments. No empty promises.”

‘The Recovery Plan is a historic achievement. The European Union has not only helped all countries meet this unprecedented crisis together, but it has also taken a crucial step towards completing its incomplete Economic and Monetary Union. To continue on this path, and to give the Union the means to accomplish the aims that our citizens demand from it, one key step needs to be taken: the commitment of National leaders to introduce new own resources has to become a reality. From the European Parliament we will commit all our efforts to setting up a system of own resources that avoids the accrimonious haggling between payers and receivers that the current system involves and provides Europe with its own sources of revenue.’

Moritz Körner MEP who negotiates on the Rule of Law Mechanism for Renew Europe in Parliament, said:

‘We need a rescue package for the rule of law in Europe. So that we can protect the tax money of hard-working Europeans from wannabe autocrats and their corrupt friends.’