Doha Forum 2022, one of the world’s premier policy gatherings, held under the patronage of His Highness Sheikh Tamim bin Hamad Al Thani, Amir of Qatar, reconvened today for its 20th edition at the Sheraton Hotel, Doha, bringing together policymakers, world leaders, and experts from around the world under the theme ‘Transforming for a New Era’.

This year’s edition of the two-day policy forum welcomes more than 200 speakers to debate some of the world’s most challenging issues, particularly the forum’s key theme of ‘Transforming for a New Era’, with a focus on four key areas; Geopolitical Alliances and International Relations, Financial System and Economic Development, Defense, Cyber and Food Security and finally Climate Change and Sustainability.

During the opening session, following the official opening by His Highness Sheikh Tamim bin Hamad Al Thani, the President of Ukraine, Volodymyr Zelenskyy received a warm welcome as he addressed the Doha Forum audience virtually, while Roya Mahboob, founder of the Digital Citizens Fund, received the Doha Forum Award 2022, which celebrates the achievements of an individual or organization based on the values of Doha Forum. 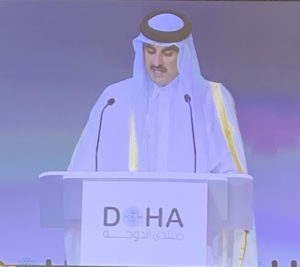 Doha Forum 2022 opened with a welcome address by His Highness Sheikh Tamim bin Hamad Al Thani, Amir of the State of Qatar, who spoke of the need for cooperation amongst the global community to more effectively address the issues of the day, saying “it is incumbent on all of us to determine the future of the international order and ask: what is the shape of the world we want for our children?” 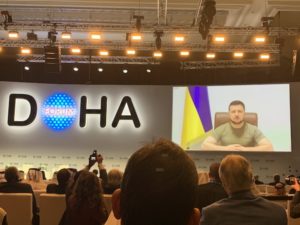 Ukrainian President Volodymyr Zelensky dialled into the opening session, echoing the call for unity, “We have to protect the international order, not just for Ukraine, but for Afghanistan, Syria, Yemen…” 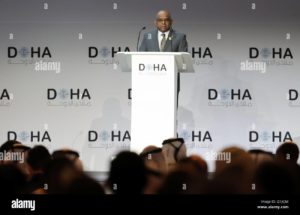 Maldives Foreign Minister Abdulla Shahid spoke too of “a time of fragility, when our world faces multiple armed conflicts, nuclear proliferation, and the widening impacts of climate change.