High Representative/Vice-President Josep Borrell visited Qatar on Saturday for talks with Qatari counterparts on enhancing the bilateral cooperation and to participate in the Doha Forum 2022.

The Doha Forum is a key platform for international leaders and officials from international institutions and the business sector to discuss global challenges and to engage with partners from around the world on issues dominating the international agenda. 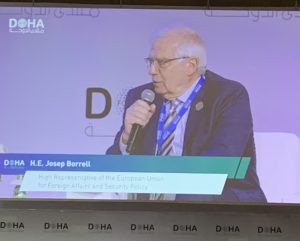 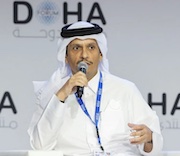 In his remarks, the High Representative focused on the damaging consequences of Russia’s aggression against Ukraine for global security, the international rules-based system and the world economy. “War against Ukraine is not only a European or Western issue. It endangers the whole world, because it tries to endorse the approach “the might is right,” he said. 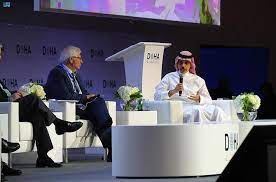 Josep Borrell stressed that the EU’s objective is to strengthen international cooperation in reaction to Russia’s actions that undermine the rules-based system and international security and to stop human suffering. “On the ground in Ukraine, Russia is committing war crimes and leaving behind destruction.” He underlined that the consequences of Russia’s actions in Ukraine will not be felt by Ukraine or Europe alone: “They will be felt by vulnerable countries in the Middle East and Africa in form of increased food and oil prices, volatility on the markets and disruption in supply chains”.

During his bilateral meetings with the Emir of Qatar Tamim bin Hamad Al Thani and Deputy Prime Minister/Foreign Minister Sheikh Mohammed bin Abdulrahman Al Thani, the High Representative expressed his appreciation for Qatar’s support to UN resolutions on condemning the Russian invasion and calling for immediate cessation of hostilities and withdrawal from Ukrainian territory. He underlined the dangers of Russia’s disregard for international law and UN principles for all members of the international community, and stressed the need to prevent President Putin and his proxies and oligarchs to find safe havens for bypassing and circumventing international sanctions.

In this context, the High Representative explained the latest decisions by the EU the reduce its dependency on Russian fossil fuels, reaffirmed the EU’s interest in deepening the strategic energy partnership with Qatar, both on increased deliveries and renewable sources, and thanked Qatar for its positive response in this regard.

The EU is already Qatar’s second trading partner and the bilateral cooperation gathers speed with increased cooperation in a number of areas, most recently on Afghanistan, where Qatar played and continues playing an instrumental role in ensuring evacuations and safe passage of EU citizens and Afghan employees of the EU. Qatar is also helping the EU to re-establish its presence in Kabul after the Taliban takeover and facilitated contacts with Taliban de facto authorities. The intensified engagement between the EU and Qatar is also reflected in the establishing a new EU Delegation in Doha that will be officially opened in summer this year. High Representative Borrell also provided his Qatari counterparts with an update on the Vienna talks about  nuclear deal with Iran (JCPOA) and exchanged views on recent developments in the region.

In the margins of the Doha Forum High Representative Borrell also held a number of additional bilateral talks and met the Foreign Ministers of Indonesia, Algeria, Jordan, Kazakhstan, Mexico, and the Prime Minister of Palestine to discuss bilateral issues and global developments.