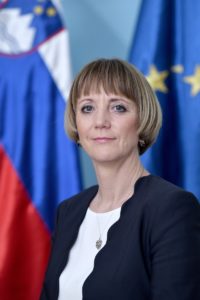 Mag. Tanja Strniša Ambassador of the Republic of Slovenia in the Czech Republic

Slovenians have a very long tradition of excellent relations with the Czechs, which dates back many centuries to when we lived in the same state formations. Today these relations are reflected in the outstanding cooperation in all areas of our lives. The two countries enjoy high-level political relations, growing economic exchanges and rich cultural cooperation. The development of regional cooperation and the links between the numerous sister cities are of great importance in strengthening the intensive relations.

Slovenians and Czechs share a rich history in the area of Central Europe. Composer Jakob Petelin Gallus, national awakener and linguist Matija Majar Ziljski, Slavist Matija Murko, author Zofka Kveder, psychologist and author Mihajlo Rostohar, theologian and Professor Gašper Rojko, and architect Jože Plečnik are just some of the many Slovenian names that have left an indelible mark on the Czech Republic. Slovenian Countess Barbara of Celje was crowned with the Czech Crown in 1437 and was later buried with full royal honours among the great names of Czech history in the Cathedral of St. Vitus at the Prague Castle.

Among the many Czechs who worked in the territory of today’s Slovenia, it is worth mentioning that Czech inventor Josef Ressel, photographer Josip Pelikan, musicians Václav Talich and Anton Foerster, director of popular Slovenian films František Čáp and others spent their creative years in Slovenia. Before the Second World War, Czechs were important investors in the banking and textile sectors in Slovenia.

During the First World War, the Soča Front took place on the territory of today’s Slovenia, claiming many Slovenian lives, as well as the lives of over 30,000 Czech soldiers. Over 200 Slovenian soldiers are buried in the common tomb of South Slavic soldiers in Olomouc, Czech Republic.

Since 1989, the two countries have followed a common path of democratisation and integration into the Euro-Atlantic alliances. Today, the two countries are partners in the European Union, NATO and the Central European area. Slovenian-Czech relations are intertwined by a multitude of common projects, rooted in a rich common historical heritage or stemming from contemporary interests and needs, as well as the opportunities offered by the EU’s single market and the borderless Schengen area.

This year Slovenia and the Czech Republic marked the 30th anniversary of the establishment of diplomatic relations. Bilateral political cooperation between the two countries is good and friendly. There is regular political dialogue between the two countries at the highest levels. Among the high-level Slovenian visits to Prague in recent years, it is worth mentioning that the President of the Republic of Slovenia, Borut Pahor, participated in the 2019 V4+ Summit and was a keynote speaker at the international conference The Prague European Summit 2021, where he also met with the Czech President, Miloš Zeman. The then Prime Minister of Slovenia, Miro Cerar, paid an official visit to the Czech Republic in 2017, and his successor, Marjan Šarec, attended the informal Cohesion Summit in November 2019. The President of the National Council of the Republic of Slovenia, Alojz Kovšca, paid an official visit to the Czech Republic in April 2019. In the last three years, the Slovenian Ministers of Foreign Affairs, Interior, Defence, Infrastructure and Agriculture have visited the Czech Republic on multiple occasions.

Today, Slovenia and the Czech Republic are EU partners and NATO allies and share many similar views. Both are strong advocates of multilateralism, a law-based international order, the rule of law and human rights. Both support EU enlargement and are long-standing supporters of the Western Balkan countries.

Slovenia and the Czech Republic often work together in the EU to push their own initiatives forward. For example, the Czech Republic, Slovakia and Slovenia were the first initiators and active supporters of European legislation banning unfair trading practices in the food supply chain and dual quality of products. An example of good cooperation between the Czech Republic and Slovenia at the EU level is the recent work of a group of like-minded Member States, which successfully advocated for the European Commission to include nuclear energy among low-carbon sources. As a very topical initiative, which was already launched during the Czech EU Council Presidency in 2022, we should also mention the recent joint letter of the foreign ministers of the informal Central 5 (Austria, the Czech Republic, Hungary, Slovakia and Slovenia) proposing steps to accelerate the granting of EU candidate status to Bosnia and Herzegovina.

COOPERATION AND JOINT PROJECTS IN CULTURE

One of the strongest cultural ties between Slovenians and Czechs was established by the famous Slovenian architect Jože Plečnik, who, at the invitation of the first Czechoslovak President Masaryk, renovated the exterior and interior of the Prague Castle between 1921 and 1935. This year, the 150th anniversary of Plečnik’s birth is being commemorated with a number of joint events. A special mention should be made of the exhibition of Plečnik’s work at the Prague Castle, which includes an exhibition by Slovenian photographer Saša Fuis, organised by the Dolenjska Museum in Novo Mesto. The Lifetime Achievement Award for the Development and Preservation of Architecture, named after Jože Plečnik, has been awarded since 2018 by the Prague Castle Administration and Architecture Week, and this year will also be presented to Slovenian architects and persons who have contributed to the strengthening of cultural cooperation between the Czech Republic and Slovenia. Preparations are also underway for the renovation and renaming of the street in the immediate vicinity of the Prague Castle as the Plečnik Avenue, for which a copy of Plečnik’s lamp will be donated by the Ministry of Culture of the Republic of Slovenia in agreement with the City of Prague. To mark the architect’s anniversary, the Ljubljana City Theatre and the Prague City Theatre are preparing a monodrama about Plečnik, which will be performed in both cities.

Slovenian-Czech relations extend to many other areas of culture. Two recent scientific studies address the intensities of cultural cooperation. Dr Jernej Weiss, in his monography, has described the work of more than 80 Czech musicians who were active in the area of present-day Slovenia at the turn of the 19th and 20th centuries, and Dr Alenka Jensterle Doležal, in her book “Slovenian Traces in the Czech Environment”, has published studies on the rich Slovenian-Czech literary and intercultural relations.

The strength of cultural ties is also reflected in the fact that the Slovenian language has been taught at the Charles University in Prague for more than 100 years and that Slovenian lectureships also operate at the universities of Brno and Pardubice. In mutuality, Czech is also taught at the University of Ljubljana. Czech is one of the languages into which Slovenian literary works are most often translated, and Czech authors are also often translated into Slovenian. Both contribute to the preservation of Slovenian and Czech in a globalised world and strengthen European linguistic diversity.

Among the major cultural cooperation projects in the recent period, we would like to highlight the exhibition of Slovenian impressionists at the Prague Castle Gallery in 2019, which was the largest ever tour of the National Gallery of Ljubljana abroad. In autumn 2020, the same gallery hosted an exhibition of masterpieces from the Prague Castle Gallery.

THE RICHNESS OF PEOPLE-TO-PEOPLE CONTACTS BETWEEN SLOVENIANS AND CZECHS

The strong connective tissue between the two nations is represented by the remarkable diversity and density of contacts between Slovenians and Czechs, cooperation between Slovenian and Czech towns, cultural associations and other organisations.

The Czech-Slovenian Friendship Linden Tree Planting Initiative is more than two decades old. The first linden tree, which is the national tree of Slovenia and the Czech Republic, was planted in the Czech town of Tábor, and to date, 64 linden trees have been planted in various Czech towns, which have cultural and other links with Slovenian towns.

Slovenia and the Czech Republic are also linked by the tradition of beekeeping. The Czech Republic was one of the first countries to support Slovenia’s proposal that the United Nations declare 20 May as World Bee Day to raise awareness of the importance of bees for food production, the environment and the eradication of hunger and poverty in the world. Slovenian and Czech beekeepers are also working together on other projects. Last year, a joint project was launched to involve wheelchair users in beekeeping, and apitherapy, pioneered by Filip Terč, a Czech who practised medicine in Maribor, Slovenia, a century and a half ago, is also a common field.

ECONOMIC COOPERATION BETWEEN SLOVENIA AND THE CZECH REPUBLIC

With its stable economic and political framework, the Czech market represents an important potential for the Slovenian economy. Opportunities for greater cooperation exist in a number of areas, in particular in the environmental and other high-tech sectors, the automotive industry, design, renewable energy, tourism and the food sector.

The Czech Republic was Slovenia’s 12th most important economic partner in 2021, the total trade between the two countries exceeded €2 billion for the first time, a major milestone that shows the growing economic integration between the two countries. The Czech Republic also ranked 12th among foreign investors in Slovenia (1.9% share in the total value of inward FDI to Slovenia) and 10th among destinations for Slovenian outward FDI (1.4% share in the total value of Slovenian outward FDI).

The Czech market is increasingly important for Slovenia’s Port of Koper, the largest container terminal in the Adriatic and the fifth largest automotive terminal in Europe. For Czech companies, especially those in Moravia, the Port of Koper is an increasingly important strategic alternative to North Sea ports and provides the fastest connection to Mediterranean and Asian markets.

Czech tourists account for 4% of overnight stays of foreign guests in Slovenia, which ranks them fifth among foreign tourists. The activities of the Slovenian Tourist Board and the Tourist Information Centre Slovenia in Prague, which was established in 2018, contribute to the growth of tourism by organising a number of successful promotional and professional tourism events and presentations of Slovenian tourism companies at fairs in the Czech Republic.

To boost economic, cultural and other cooperation, Slovenia opened its first Honorary Consulate in the Czech Republic in Brno in 2020.

Mag. Tanja Strniša, Ambassador of the Republic of Slovenia in the Czech Republic