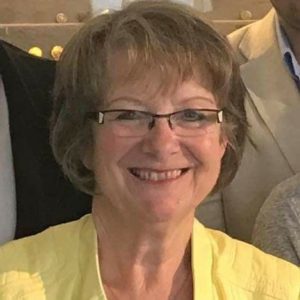 Could you talk to us about GAZELEC ENERGY OF SANTERRE? What are its tasks and responsibilities?

The origin of the Régie goes back to 1875 where a deliberation was taken for its creation in order to face public health problems related to the consumption of non-potable water. Electricity competence was attributed with the arrival of the electric fairy in 1900 and a few years after that of gas via coal gas produced on the current site of the Régie.

To date, the Régie still has these tasks in addition to those of sanitation, street lighting and traffic lights.
The Régie monitors the fluids, their productions (pumping water) and their transformation (2 source stations and one GRT gas station) as well as the distribution of these fluids. It also provides billing and collection. The Régie carries out the maintenance and extension of its networks.

As the opening of the market resulted in the end of regulated sales tariffs and the possible loss of its users, it was decided to create a company, Energies du Santerre, a sole shareholder (Gazelec) in order to compensate for the loss of these users. To date, the objective is met since Gazelec, which can only lose users on its territory, has lost fifty compensated by the 5000 gained outside its historic territory by the still growing Énergies du Santerre. 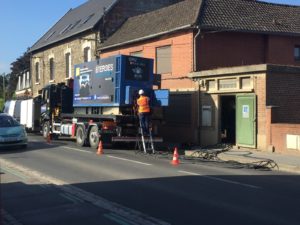 You are one of the major players in the VertPom project (Veritable enERgy of the Territory that is Positive and Modular) could you present this project and its advantages briefly?

The Régie is obliged, like any electricity and gas network operator, to set up smart meters that also have the option of integrating different tariff schedules. Since 2004, the Régie has developed this communicating meter on the city of Péronne as a laboratory. The question we asked ourselves was “how to move to a higher stage while developing a control of the energy demand on the city by integrating the impact of renewable energies but also to reduce the energy bill of Péronne citizens, and for all this to be reproducible in other ELD territories or not.”

Based on this observation and experience we have with our partners, CIAC-IT and the University of Picardy Jules VERNE responded to a call for projects from Ademe where our values have found their place. I want to point out that this project is the only one in France and in Europe to have multi fluids, gas electricity and water.

It was in May 2017 that the Prime Minister sent us a letter authorizing this project that then became VERTPOM. 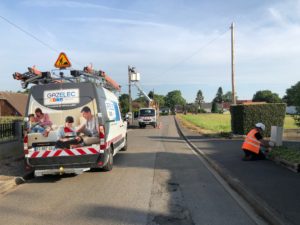 Launched in October 2017 at the level of your municipality, what is your initial assessment?

VertPom started with the public through a letter sent to our users informing them of this project but also asking them to participate actively in the development of the project city. This participation allows them to be active in the drafting of the website to make known their expectations but also to be actors in the field as consumers.

Feedback was positive seeing that a hundred people attended the two public meetings and 30 are volunteers for active participation in VertPom.
Today there are more than 2000 Ibox (Electronic Counters) registered, Version 4 of the software Idems is being migrated and we have sent a first questionnaire validated by the 30 actors / Ambassadors of VertPom.

What are the marketing prospects for this project with energy distribution companies? What will your involvement be?

For the moment I cannot say too much without the agreement of the consortium and especially since we are in competition with other projects.

However, I can tell you that meters are being tested in a European country for the solution of smart meters and these are telemetered by the Régie. A second country has just signed our confidentiality agreement for the solution of multi-fluids, gas, water and electricity. Finally, exchanges are underway with two other countries outside of Europe.

Our involvement in this commercialisation will be according to demand. Indeed, with an experience in the world of energy but also in networks that we operate, we will be able to answer any questions or support on these topics whether it be:

In addition, we must not forget the marketing part that we provide at GAZELEC on its territory by keeping our green and yellow tariffs despite the opening of the market in France. We must also keep in mind that we have developed through Energies Santerre, which has more than doubled our customers outside our historic territory by offering gas and electricity contracts throughout France.

On the eve of the European elections, how can this project fit into the energy efficiency targets for 2020-2030?

Our VertPom project is at the heart of energy efficiency.

I say at the heart because VertPom integrates energy from its production to the point of consumption via an energy bank as well as different algorithms and according to supply and demand. VertPom integrates users as actors but also via a dedicated site and a single access for all energies. It also uses the instrumentation of public energy-consuming buildings along with positive energy, such as the seat of the Régie, in order to know the customs and energy-consuming positions. This instrumentation will be present on the distribution networks to integrate the effect of renewable energies in the energy bank. This instrumentation will also be reproducible on the networks of the different managers, which means that the GRD’s participation can be dispensed with by paying for its data of time-shifted measurements. VertPom is made up of 5 PhD students from the University of Picardie Jules VERNE in energy and sociologists.

Furthermore, the problem of the consumptions of electricity and gas is generally approached and that the water, in spite of the fact that it becomes more and more rare in our tablecloths, has for me not yet its place in these objectives.