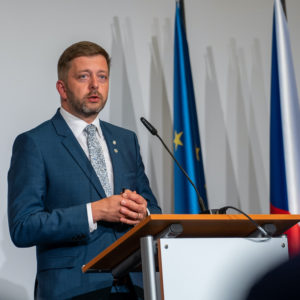 Journal Général de l’Europe (JGDE): Can you briefly introduce us to the Ministry of Interior? missions and duties at national level (reform of specialized police services, and others)

Vít Rakušan (VR): The Czech Ministry of Interior is in charge of a vast number of areas relating to Home Affairs, most notably internal security, border protection, public administration and eGovernment. In the area of migration and border protection, the work of ministry, focuses, for example, on granting refugee status or residence to foreign nationals, as well as their integration into society. In this area, the international cooperation is very important.

In regard to public administration and eGovernment, we strive to make the services quicker, more effective and more available to our citizens through digitalization. Other tasks include road traffic safety supervision, maintaining archives, state, economic and service secrets or maintaining public order.

Furthermore, the ministry oversees the work of Police and Fire service and cooperates with Interpol.

JGDE: What are your priorities for the Presidency?

VR: The most important priorities for the Ministry of Interior include the impact of the war in Ukraine on various areas of Home Affairs, as well as ensuring the proper and secure functioning of the Schengen area and strengthening security of EU borders. This goes hand in hand with the need to continue discussions on the future EU asylum and migration policy following the successful work of the French presidency.

In the area of internal security, we will work on improving the cooperation of law enforcement authorities, while paying special attention to enhancing fight against child sexual abuse.

Regarding the area of General Affairs, the Czech Presidency will continue negotiation of the legislative proposals presented in the package on protecting election integrity and promoting democratic participation. We will also continue discussing the Reform of the EU electoral law submitted by the European Parliament.

JGDE: Incidence of the war in Ukraine?

VR: The war in Ukraine has consequences for migration and security that the Czech Presidency is ready to actively address.

Our security is negatively affected by cyberattacks and hybrid attacks connected with dissemination of disinformation linked to the Russian Federation. Special concerns relate to trafficking in human beings and, in general, to crimes against children and youth.

In a broader perspective, risks arise from the permeable Eastern borders of Ukraine, a huge amount of firearms on the territory of Ukraine, impacts of the war in terms of destabilisation of wider EU neighbourhood (Moldova) as well as a potential increase in migration as a result of an imminent food crisis.

The topic was high on the agenda of the Informal Meeting of Home Affairs Ministers on 11 July in Prague, where we discussed the need for close cooperation with the Ukrainian and Moldovan authorities as well as ways to help these countries in coping with increased security risks.

The EU Member States, Ukraine and Moldova should therefore systematically exchange data on the investigations of human trafficking, document forgery, money laundering, arms trafficking, organised property crime, and other types of crime as well as on hybrid threats related to the war in Ukraine. To facilitate this, the EU Support Hub for Moldova, which aims at deepening EU-Moldova cooperation in the areas of security and border management, was officially launched at the Prague ministerial meeting. The EU and Moldovan authorities, including representatives of Frontex, Europol and the Moldovan Police, will participate in the project directly in Chisinau.

JGDE: The reform of the European asylum and migration policy and the protection of the Schengen external border?

VR: In terms of the European asylum and migration policy, we will strive to build a resilient system that will be able to address the causes of migration, the protection of our borders as well as the issue of solidarity.

Regarding the internal dimension of migration and building on the gradual approach initiated by the French Presidency, we would like to start trialogues with the European Parliament on the screening and Eurodac regulations. The Czech Presidency is committed to achieve tangible progress in the reform of the European asylum and migration policy.

The Czech Presidency will also open the debate on the legal migration package and visa digitalization.

As for the external dimension of migration, we will focus especially on the eastern and southeast neighbourhood. The flagship event will be the Ministerial Conference of the Prague Process to be held on 24 and 25 October 2022 in Prague.

Regarding the proper functioning of the Schengen area and strengthening security of EU borders, we would like to make the next generation of the Schengen Information System operational in autumn 2022.

We will also focus on the implementation of the Schengen Strategy presented by the Commission last year. Emphasis will be put on the revision of the rules for the reintroduction of internal border controls and the streamlining of external border management. Last but not least, we will devote our attention to making progress as regards Schengen integration of Bulgaria, Romania and Croatia.

JGDE: European different projects of collaboration, the perspective of development?

We are well aware that this proposal is very complex and addresses some sensitive issues and that the negotiations will not be easy, but our goal is to make as much progress as possible. Protecting our children is number one priority, as we discussed it at the informal meeting of Ministers of the Interior on 11 July in Prague. There, we focused our attention on the issue of providers’ obligations.

Our aim in this area, in general, will be to ensure that the new system is balanced and that the obligations resulting from it are comprehensible and realistic. It will be key to strike a fair balance between the protection of child victims and the security on one side and privacy rights of all users of online services on the other side.

European cooperation is also important in the area of drugs policy, where we will focus also on the revision of the regulation on the European Monitoring Centre for Drugs and Drug Addiction.

JGDE: What are the major challenges in the national and international area in the world of today and tomorrow?

VR: We address some of the biggest challenges in the national and international area in our priorities for the Presidency. The greatest one as of now is the war in Ukraine and its consequences Besides that, the well-known challenges remain relevant: internal security, disinformation and cybersecurity threats.