The EU and GCC share an interest in addressing global challenges such as green and digital transition, climate change and counter-terrorism. The 26th EU-GCC Joint Council and Ministerial Meeting convened the 21st February in Brussels will resume high-level institutional engagement between the two organisations and discuss concrete ways forward to strengthen dialogue and cooperation on both regional and global challenges.The GCC includes Bahrain, Kuwait, Oman, Qatar, Saudi Arabia and the UAE. 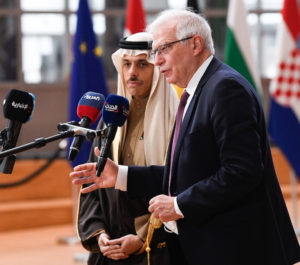 Josep Borrell said: “We are both going to chair an important meeting of the EU and the GCC. It shows the importance of the Gulf, not because at the moment we have some security concern related with energy, because in a permanent basis the EU has to engage more,” “We are first investor in the region and second trade partner but politically we are not at the same level. Our relations have to be enhanced and I think this is the good moment to do so. This is going to be the first step for stronger and deeper relations,”.

Prince Farhan, the Saudi foreign minister (Saudi Arabia is the current chair of the GCC) expressed his appreciation to Borrell for hosting the 26th EU-GCC joint commission and said.  “We have strong relations in the economic side but it is important that we continue this high-level consultations,” ‘’they are following closely the ongoing talks on the Iran nuclear deal and noted that the EU has an important role to play in the security of the Gulf’’.

“We will be talking about regional security and international peace but also the agenda that is the most important which is the international cooperation vis-a-vis climate change, vis-a-vis energy security but also deepening our strong bonds and ties between our two blocs,”
“So we look forward to a very interesting conversation today, and all GCC ministers are happy to be here today,”. 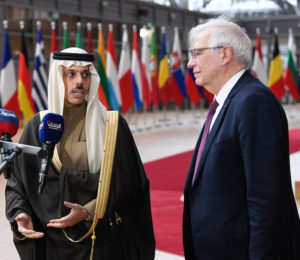 Josep Borrell said: I personally am in charge of coordinating the negotiations between Iran and the international community in order to avoid Iran becoming nuclear. This is a very important issue for the security in the region. Just that certifies the important role that the European Union is playing, but we want to do more than that.

We are going to nominate a Special European Union Envoy for the Gulf region, because we know that the security issues in this area – in the broader Middle East – are very important for us. Not only because of Iran. Look at the war in Yemen, for example. Not just because of energy, but because in this region the transition towards a green economy will be one of the most important aspects for us, for them, for the humankind.

The projects being the EU-GCC Dialogue on Economic Diversification and the EU-GCC Clean Energy Technology Network. As countries of the Arabian peninsula are putting in place ambitious economic diversification and social transformation programmes, there is a stronger need for the EU and its partners from the Gulf to strengthen ties and increase mutual understanding. By supporting political dialogue through concrete activities as well as cooperation and outreach between the two sides, the Enhanced EU-GCC Political Dialogue. 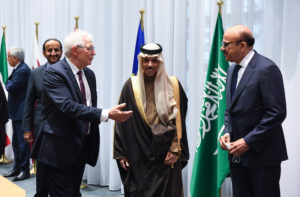 The 26th Session of the GCC-EU Joint Council and Ministerial Meeting was held in Brussels, on 21 February, 2022. The EU delegation was headed by His Excellency Josep Borrell, High Representative of the European Union for Foreign Affairs and Security Policy / Vice-President of the European Commission. The delegation of the Gulf Cooperation Council was headed by His Highness Prince Faisal bin Farhan Al Saud, Minister of Foreign Affairs of the Kingdom of Saudi Arabia, Chairman of the current session of the Ministerial Council of the Gulf Cooperation Council. The meeting was attended by EU and GCC Foreign Ministers, in addition to H.E. Dr. Nayef Falah Mubarak Al-Hajraf Secretary-General of the Cooperation Council for the Arab States of the Gulf.

EU and GCC ministers reviewed the fruitful progress in the strategic partnership between the Gulf Cooperation Council and the European Union and noted the minutes of the meeting of the EU-GCC Regional Directors in July 2021 and the minutes of the meeting of the Joint Cooperation Committee held in the General Secretariat on 03 February 2022. They stressed the importance of continuing to strengthen relations between both sides in light of regional challenges, in order to be a strong and effective basis for regional and international security and stability.

The Ministers agreed on the importance of enhancing relations between the GCC and the EU in a wide range of areas, including political dialogue, regional security, counterterrorism, trade and investment, energy, climate change, education, health and cybersecurity and to strengthen coordination in multilateral fora. To this effect, they endorsed a Joint Cooperation programme for the period 2022-2027. They affirmed that this partnership contributes to deepening mutual trust, achieving common interests, and maintaining regional and international security.

The Ministers stressed the importance of promoting joint action in combating climate change, protecting the environment and developing renewable energies. They commended the commitments expressed by the GCC countries in this regard, and welcomed their active participation in the UN Climate Change Conference COP26, and the announcements regarding net-zero ambitions and implementing the Circular Carbon Economy approach updating the nationally determined contributions. The Ministers stressed the importance of developing long term strategies to guide the full implementation of the pledges. They affirmed that the inclusive implementation of the commitments and principles of the UNFCCC and the Paris Agreement, including COP26 outcomes, is the basis for progress in meeting the Sustainable Development Goals of the 2030 Agenda, in sustainable investment in all climate solutions, development partnerships, and energy cooperation. Ministers commended the leadership of the Kingdom of Saudi Arabia for launching the Middle East Green Initiative as well as the commitment of the GCC states to cooperation in its implementation. They congratulated the United Arab Emirates on hosting the COP28 Conference, Bahrein on aiming to reach net-zero emissions by 2060, and Qatar on hosting the International Horticultural EXPO 2023, as these are important signals to the international community that reflect the region’s determination to take measures to protect the environment for future generations.

The Ministers exchanged views on issues of common interest, including the Middle East Peace Process, Yemen, Iran, Libya, Syria, Lebanon, Iraq and Afghanistan. They stressed the strategic importance of close coordination between the GCC and the EU in this regard.

The Ministers stressed the urgent need to improve the humanitarian situation in Yemen, agree on a ceasefire without preconditions, and reach a political resolution to the conflict through negotiations facilitated by the UN, based on the GCC Initiative and its implementation mechanism, the outcomes of Yemen’s National Dialogue Conference, and UN Security Council Resolution 2216. They underscored the importance of Saudi Arabia’s initiative for a ceasefire and political solution in Yemen.

The Ministers expressed their condemnation in the strongest terms of the terrorist attacks launched by the Houthi militia using missiles and drones against the UAE and the KSA, and expressed support for peaceful solutions for Yemen. They reaffirmed that terrorism in all its forms and manifestations constitutes one of the most serious threats to international peace and security.

The Ministers reiterated their concern at the lack of progress towards resolving the dispute between the United Arab Emirates and the Islamic Republic of Iran over the three islands Abu Musa, Lesser Tunb and Greater Tunb. They reiterated their support for a peaceful settlement of this dispute in accordance with international law, either through direct negotiations between the parties or by referring the matter to the International Court of Justice.

The Ministers condemned the proliferation of ballistic missiles and drone systems used in hundreds of attacks against civilians, civilian infrastructure and the Global Coalition Against Daesh/ISIS.

The Ministers addressed the JCPOA talks in Vienna and stressed that a full and effective implementation of the JCPOA can contribute to comprehensive and lasting efforts to ensure that the Gulf region remains permanently free of nuclear weapons and help address other regional issues.

The Ministers agreed on the importance of continued common international efforts to enhance stability and prosperity in Iraq, prevent the spread of violent extremism in the country, including Daesh/ISIS, and improve prospects for economic recovery, and energy independence.

The Ministers denounced the attempt to assassinate Prime Minister Mustafa Al-Kadhimi, praised Iraq’s ability to complete the parliamentary elections and underlined the need to form a government, which reflects the results of the election in order to maintain political stability.

The Ministers expressed their concern regarding the humanitarian and economic crisis in Afghanistan, and agreed on the importance to urgently respond to the needs of the Afghan people, including refugees and displaced persons. They stressed the importance of the Taliban fulfilling their human rights obligations, especially towards women and girls, counterterrorism commitments, including not allowing any terrorist organisation to train, organise or raise funds in Afghanistan, as well as the importance of preventing foreign fighters from entering the country. Ministers also highlighted the need for inclusive governance in Afghanistan. Ministers called on the Taliban to ensure unimpeded access to aid and urged the international community to find ways to provide all other types of funding necessary to provide basic services directly to the population.

On Syria, the Ministers expressed their deep concern over the deteriorating humanitarian situation. They agreed on the need to provide basic life-saving assistance in all areas of Syria, as part of the implementation of the UN Humanitarian Response Plan. The Ministers reiterated their support for the full implementation of Security Council Resolution 2254, including the political process led by the UN Special Envoy.

Regarding Lebanon, the Ministers viewed positively the resumption of regular meetings of the Council of Ministers of Lebanon and urged expeditious and effective decisions by the Lebanese Government to initiate direly needed reforms that would enable a quick conclusion of the agreement with the International Monetary Fund (IMF). The Ministers also underlined the importance of holding free, fair, transparent and inclusive elections as scheduled on 15 May 2022, and called on the Lebanese authorities to promptly make available all the necessary resources and intensify technical and administrative preparations to ensure the adherence to the agreed timelines and ensure the integrity of the electoral process. They also underlined the need for confidence building measures, and the need to work together to help maintain Lebanon’s stability and respect for its unity and sovereignty in line with UNSC resolutions 1559, 1680 and 1701.

On the Middle East Peace Process, the Ministers called for de-escalation in Jerusalem and reiterated their commitment to a two-state solution that meets the legitimate aspirations of the Palestinian people, based on 1967 lines and UNSC resolutions 242, 338, 2334 and other relevant UN resolutions, Jerusalem as the shared capital of both states, and a just and fair settlement for refugees. They reiterated the importance of sustained financial support for UNRWA.

On Libya, the Ministers re-affirmed their support for the UN efforts to hold free, fair, inclusive and credible presidential and parliamentary elections. They renewed their call upon all political parties in Libya to refrain from actions that undermine the political process and to adhere to the results of the elections, and stressed the importance of the withdrawal of all foreign fighters, foreign forces and mercenaries from Libya without delay.

The Ministers welcomed the success of the 6th EU-Africa summit, held in Brussels on 17-18 February 2022, and underlined the importance of GCC-EU co-operation on African issues.

GCC and EU Ministers agreed to hold their next meeting in 2023 in the GCC region.