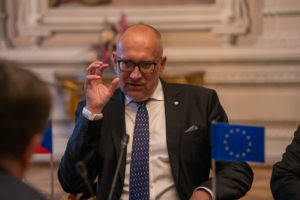 We have grown up in the EU

This is the name of the exhibition that will travel around the Czech Republic during the Czech Presidency. At the same time, the headline is also a kind of metaphor for our eighteen-year membership in the European Union. As well as young people at the age of eighteen, who mature, leave the period of defiance and take responsibility for their functioning in society, I believe that the Czech Republic, in its relationship with the European Union, has also come to co-responsibility for the formation and functioning of our common European living space.

Responsibility for Europe’s role is also at the heart of our Presidency motto: ‘Europe as a task: Rethink, Rebuild, Repower’. We want to acknowledge the legacy of Václav Havel, who in the breakthrough decade of the 90s – like us today – felt the need to redefine Europe’s role in the changing world order.  Like the fall of the Iron Curtain, the current war in Ukraine has changed political constants in Europe for decades in a matter of weeks. At the same time, the motto is a pragmatic reminder that we must all be constantly working towards a modern and functioning Europe.

The Czech Republic takes over the EU Presidency in difficult times. War returned to Europe after many decades. We are witnessing the most massive refugee crisis in Europe since World War 2. National governments and the European Union as a whole are addressing vital issues such as energy and food security, record inflation and defense against multiplying cyber-attacks threatening the functioning of our increasingly digital society. The answer to most of these risks and threats will have to be sought at European level.

As the presiding state, we have before us the difficult task of a mediator and a crisis manager at the same time. Over the course of six months, we will moderate the European debate and seek viable compromises between the interests of individual Member States. We will represent the Council of the EU in negotiations with the European Commission, the European Parliament and, in part, external partners. Given the intensity of the sense of threat from different sides, a considerable amount of diplomacy and creativity will be needed. Above all, however, it will be necessary to maintain European unity. And the Czech Republic, as a state located in the heart of Europe, is well placed to do so.

This also applies to the first priority of the Czech Presidency, which is to resolve the refugee crisis and support Ukraine in its fight for peace and democracy. The Czech Republic has its own historical experience with Russia’s expansionist policy and is also the target country of the current migration from Ukraine. We are therefore very well equipped to moderate the European debate with due empathy.

As for the other priority areas, most of them have been on the table for some time, but the situation associated with the war in Ukraine has clearly accelerated the discussion on some of them and increased the importance of others. One of the crucial topics will be the strengthening of the European Union’s defense. The new situation has created more positive environment for the debate on European defense capabilities, which has so far been hampered by concerns among some Member States about a possible weakening of the alliance with the United States.

The new situation has also underlined the importance of moving towards a green Europe. Moving away from fossil fuels is not just a question of meeting climate targets, but of energy security and economic viability. Also in this area we will strive for as many European solutions as possible, for example in the area of joint purchases of natural gas or the development and sharing of transmission systems.

From the beginning, when I took up the post of Minister for European Affairs, I was clear that one of the priorities should also be the resilience of democratic institutions – as well as now, in the light of events on the Union’s eastern border, the security motive emerges as the common denominator of the Presidency’s priorities. Russia’s aggression has once again urgently reminded us that Europe’s long-term prosperity and stability is based on functioning democratic mechanisms. We will therefore focus on the protection of electoral processes and the freedom of the media.

This does not mean that we forget other long-term and urgent priorities, such as the Digital Agenda, cybersecurity or strengthening supply chains through new trade agreements.

The main motto ‘Europe as a task’ – and in particular its ‘Rethink’ dimension – is also reflected in continuing the debate on the future of Europe. It will fall under our Presidency to implement the reform proposals that have emerged from the Conference on the Future of Europe. We see this as a unique feedback from citizens on what kind of Europe they would like to live in.

The final report contains 49 proposals and several hundred measures of various types and importance. It will be necessary to determine what can be implemented in the existing legal framework and what would require change to the EU treaties. In any case, during our Presidency, we will look for a way to reflect citizens’ demands quickly and operationally.

Last but not least, it is important to realize that our Presidency efforts will not completely disappear by the end of this year. From the outset, we have been in intensive dialogue with other Member States of our Trio Presidency – France and Sweden – on how to continue as effectively as possible what our French colleagues have started and what our colleagues from Sweden will be able to follow up on.

We are in for a ‘hot summer’ and a ‘hot autumn’, but I hope that we will prove ourselves as the capable EU Presidency. After all, we are already, as I mentioned at the beginning, adult members of the European family.