The Czech Republic has always been at the heart of Europe. 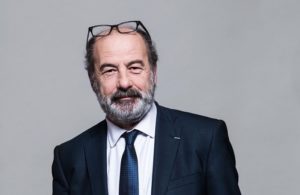 The virtual transfer of the torch» of the French Presidency of the EU Council and the Czech Republic in Paris took place on the 30th. June on the Trocadéro esplanade with behind the Eiffel Tower illuminated in blue. The Minister of Culture Rima Abdul-Malak and the Minister Delegate for Europe Clément Beaune, who were present, have kindly signed the book Le tour de l’Europe, where a writer from each country presents a short story presenting his share of the European experience. The dedications called for courage, friendship and unity in the European Union.

On July 4, we launched the Presidency with a concert at the Church of Saint Eustache in the centre of Paris, in what was called «the belly of Paris». The sopranist Lucie Silkenová of the National Theatre, accompanied by one of the most famous organists, Vladimír Roubal, illuminated Saint Eustache with French and Czech composers, from Gounot to Fauré and arriving in Martinů, Dvořák and Leoš Janáček.

In order to present the Czech priorities, the Senate Committee on European Affairs, as well as the University Council of Paris at the Sorbonne, opened the doors. On 12 July at the Museum of Modern Art of the City of Paris, in front of the huge painting of Delaunay, in the colors of the logo of the Czech Presidency, Mrs Catherine Colonna, Minister of Europe and Foreign Affairs, made us the honor to preside the opening breakfast of the Czech Presidency in France together with the ambassadors of all countries of the EU.  Fabrice Hergott, director of MaM, then took us on a tour of the exhibition of the Czech and French painter Toyen, the «baroness» of surrealism as André Breton called it.

A festive atmosphere and a deep friendship between our two countries. But there is war, there is war in Ukraine, Russia attacks Europe. Listening to Minister Catherine Colonna, I am a man of radio, I could see how France and the Czech Republic are «on the same wavelength». We also want to end the war and do everything we can to rebuild Ukraine. The Czech Republic is committed to this and will submit to the EU ideas and advances for an EU that is always united and unwavering in the face of the cruelty of an unjustified occupation by Russia of Eastern Europe. Together, we have seen that after February 24, 2022, nothing will be the same. We agreed on the need to ask ourselves the question of reshaping the basics of our structures, not only within the EU but globally. The war in Europe, in Ukraine, has highlighted the existing and potential gaps, imbalances and dangers. The war also showed the formidable and unique unity of free countries in the face of the aggressor. France has strongly advanced and helped to set up the EU’s unequivocal response to Russia. The Czech Republic will do the same and move in the same direction, deepening our no to Russia, deepening European unity and proposing to the EU ideas and solutions to be discussed and implemented. The end of the war, the refugee crisis, the reconstruction of Ukraine, the solutions to the problems thus created such as those of energy, defence, economy. Together with France and all EU countries we must strengthen our democracies and the rule of law. This is our life, we have to face the facts.

The Czech Republic, often in the past alone in the face of terror, is today just behind the French Presidency of the Council of the EU at the head of this same Council.  It’s a game changer.

It makes me think that already in the 15th century, the King of Boheme Georges de Podiebrady (as Georges Sand wrote) tried to find understanding among the great ones of the time, including the King of France Louis XI, when he proposed a «Agreement for the establishment of peace in the whole of Christianity» in the face of the danger coming from the East (of the Turks at the time). While being wary of the anachronisms that Georges de Podiebrady proposed to «westerners»? A General Assembly bringing together the representatives of the European countries, a Council of Sovereigns, an international tribunal, a common European fund, a common currency, a Unified Law for all the members of the organisation and, in the end, a common emblem. Never seen it before. Today a reality and a necessity. Georges de Podiebrady did not find an echo for his project. Failure or good basis for the Czech Presidency. In any case, we are still talking about it today.

The Czech Republic and France have a long history and each era has its own realities and its own way of reading and thinking about its time. What we know today is that we have within the EU in these historical times, a same reading, we are on the «same wavelength». France and now the Czech Republic, humbly, “at the helm” of the EU Council and under the slogan of Václav Havel, “Europe as mission – to rethink, rebuild, strengthen Europe” have a responsibility that they assume and live.