Signing ceremony for the opening of the EU delegation in Qatar

Today, EEAS Secretary General Stefano Sannino and Qatari State Minister for Foreign Affairs Soltan Bin Saad Al-Muraikhi signed in Brussels the Establishment Agreement for the new EU Delegation to the State of Qatar. They did so on behalf of High Representative Josep Borrell and Deputy Prime Minister/Minister of Foreign Affairs of Qatar Mohammed bin Abdulrahman Al-Thani. 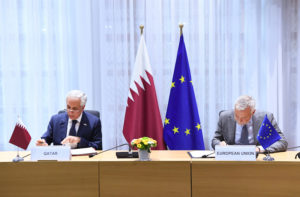 The opening of the EU Delegation, announced during the visit of High Representative Josep Borrell in Doha last September, is planned for this year. It is the latest milestone in the partnership between the EU and Qatar.

The mutual relations have been strengthening steadily over recent years. A Cooperation Arrangement between the EEAS and the Qatari Ministry of Foreign Affairs was signed in 2018. A Human Rights Dialogue was launched the same year, and in October last year Qatar became the first Gulf country to sign a Comprehensive Air Transport Agreement with the EU. A diplomatic presence in Doha will help the EU further strengthen the very solid bilateral cooperation with Qatar.

Qatar’s assistance in repatriating stranded EU nationals at the beginning of the COVID-19 pandemic and, more recently, support in evacuations of EU nationals and Afghans at risk from Kabul, are telling examples of the nature of the partnership between the EU and Qatar.
Symbolically, today’s signature takes place on the same day as the 26th EU-GCC Joint Cooperation Council in Brussels. 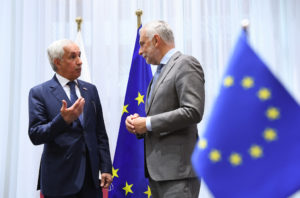 With the opening of the Delegation to Qatar, the EU will reinforce its presence in the Gulf, which is a region of key importance for the protection and projection of European interests.

The State of Qatar Ministry of Foreign Affairs declare: 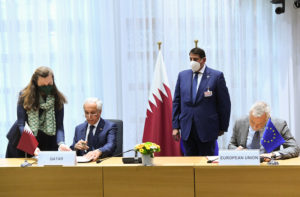 HE Ambassador of the State of Qatar to the European Union and the North Atlantic Treaty Organisation (NATO), Abdulaziz bin Ahmed Al Malki, attended the signing ceremonies.

The agreement, according to which a mission of the European Union will be established in the State of Qatar, follows the decision of HH the Amir Sheikh Tamim bin Hamad Al-Thani to establish a mission for the European Union to the State of Qatar, aiming to strengthen the Qatari-European relations and open new horizons for cooperation between the two sides.

The agreement is the culmination of many years of intensive and joint work in various fields, a translation of the progress made on the ground and upgrading of diplomatic relations between the two sides, and a testimony to the great interest that the European Union attaches to the State of Qatar in light of the new common challenges and goals’’.

With the new Delegation to be opened in Doha, the number of EU Delegations and offices worldwide will reach 145 and the EU will be diplomatically present in 136 countries. The last Delegation opened so far was the Delegation of the EU to the Association of Southeast Asian Nations (ASEAN) in December 2021 in Jakarta.

The Delegation of the European Union to the State of Qatar will be a fully-fledged diplomatic mission, responsible for the EU’s political and economic relations with Qatar.

The role of EU Delegations is to represent the EU politically and develop the bilateral relation between the EU and the host country, as well as coordinate the activities and outreach of the EU and its Member States. Apart from this, the EU Delegation promotes EU interests and values, raises awareness and makes the EU and its policies known to the general public, as well as to the state and private sectors in the host country. It serves to enhance people-to-people relations and to build bridges between the society of the host country and the citizens in Europe.

We will probably know after the summer the name of the representative of the European Union who will be entrusted with this great responsibility and opportunity. The Journal Général de l’Europe will not fail to inform you of this.