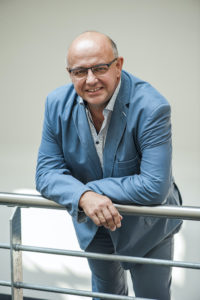 Can you briefly introduce us to OLTIS Group? And the IRFC event of October 2022?

OLTIS Group is a Czech Company for Information Systems in Transport.

It is a purely Czech business entity comprising member companies. Since 1997, it has stamped its authority on the information systems market for transport and logistics through sustained success and reliability. The associated specialized software companies within OLTIS Group work synchronously and effectively, thereby offering complex and highly customizable information system solutions wherein several key components are tailored to the needs of the clients. This is one of the key strengths and the niche of OLTIS Group.

IRFC 2022 (International Railway Forum and Conference 5-7 October 2022) is a significant event with the auspices of the Czech Presidency to the EU council, and this is the 7th conference, which first started in 2008. This conference is focused on the entire rail sector description. It means that at the upcoming sessions, all topics important for the railway sector will be discussed. The conference is held under the motto which is « Let’s build the railway system of the new generation together. » So, it is about cooperation in the railway sector.

The main conference benefit is seeing the networking of politicians, top managers, and persons responsible for the rail system development in Europe. And last but not least, the conference will assess if the sector is really on the right path to build the new railway system of the future together. So, this is the message which is now in preparation to be addressed to the entire railway sector in Europe and the Czech Republic. That is, how to contribute more significantly, faster and on the right path to the development of the rail system.

The key priorities of our Presidency are:

– the interconnectivity of transport networks in Europe and the adjustment of the scope of the TEN-T rapid transport network that is still in force. Both should enable better transport for all. In this area, this is an important opportunity for the Czech Republic to build not only high-speed lines, but also to further modernize the entire transport network.

– reducing emissions, promoting environmentally friendly transport and safe and intelligent mobility. This can also contribute to reducing dependence on fossil fuels and boosting competitiveness, which are other important priority areas.

– discussing the revision of the TEN-T policy as a way to ensure better transport connectivity in the EU. The Czech Republic wants to focus on this area, in particular on the development of high-speed railways. Better connectivity of transport networks is also important with regards to the infrastructural renewal of Ukraine.

In addition to the above-stated priorities, safe and intelligent mobility includes autonomous transport, as well as support for research and innovation in this and other areas.

Could you present the OLTIS Group economic area and the projects, the perspectives of development and the strategic role you could play?

It is a purely Czech private group of specialized software companies closely cooperating since 1997.

The main development base and headquarters is located in Olomouc, Czech Republic, with its own subsidiaries in Slovakia, Poland, and Hungary.

The Group companies are socially responsible for the region, environment, employees, and customers. The whole Group is composed of more than 200 employees.

Two of our core areas of focus are IT systems for Infrastructure Managers and Freight + Passenger Railway Undertakings, which constitute complex IT support solutions for ensuring railway operation during the entire life cycle of a train.

The advantages include highly interconnected data, consolidated and comprehensive solutions, including data communication with information systems of railway undertakings as per TAF TSI.

Research, Development, and Innovation Projects are at the heart of OLTIS Group activities. We have been actively involved in Shift2Rail Projects. Since the start of the new EU financial period, we are actively participating in Europe’s Rail JU.

I see the strategic role of OLTIS in the area of interoperability of IT systems (TAF/TAP TSI) and their implementation in Central and Eastern Europe.

OLTIS Group Products Are Verified as Compliant with TSI.

Railway regulatory interoperability as an EU priority requires compliance with the regulatory, technical, and operational conditions contained in the European Parliament and European Council directives.

Could you give us an idea about the international collaboration and OLTIS Group´s role in its environment and sphere of digitalization?

Since 2009, OLTIS Group Has Been Active Abroad, Especially with European Institutions and Organizations.

-Representation of UNIFE in the TAF / TAP TSI change management process at the European Union Agency for Railways (ERA).

OLTIS Group places emphasis on minimizing the impact of its activities on the environment. The modern HQ of OLTIS Group in Olomouc is equipped with state-of-the-art technology and ranks among notable energy-saving constructions.

Despite its size, OLTIS Group still maintains its family environment. The team consists mainly of long-term employees (dozens of colleagues have been working in the companies for more than 20 years) and all team members are recruited from our branch offices or from nearby. Therefore, the group is a stable employer supporting the local labour market.

The companies of OLTIS Group are actively engaged with the concerned community through supporting and fostering healthy social life in a number of ways:

For many years, OLTIS Group has supported Charity Šternberk, the Children’s Home of Dagmar in Brno and the S.O.S family house for temporary stay « Sindbad ».

Financial contributions are dispersed among smaller sports clubs and interest organizations in the areas of operation of the companies.

OLTIS Group‘s role in the sphere of digitalization is represented by its custom development, services.

OLTIS Group has over 20 years of experience in implementing bespoke information systems. This is a complex solution that is connected to the existing corporate systems and applications. A team of fully qualified personnel support customers from the analysis and information system design to the final implementation and staff training.

All these steps are followed by complete technical support and service after full handover. The emphasis is placed on data security and on the systems itself. Additional services include consulting, advisory and cloud services in the field of information systems and information technologies for transport, forwarding and logistics.

What are the major challenges for your sector in the national and international area in the world of today and tomorrow?

The most important challenges for the railway sector in the current period are: