Can you briefly introduce us to the Ministry of the Environment?

The Ministry of the Environment is the central governmental authority and supreme supervisory authority in environmental matters in the Czech Republic. Our competence includes the protection of water, air, nature and landscape, soil, mineral resources as well as waste management. We are responsible for assessing the environmental impact of activities and their consequences, including those that cross national borders. Also, specially protected areas including national parks are designated by the Ministry of the Environment. We develop environmental legislation and monitor compliance with it and we manage national environmental policy. Ministry´s tasks include also providing grants, training and support environmental education across generations. We coordinate the actions of all ministries and other central authorities of the Czech Republic in environmental matters to ensure and control the activities of the government.

A major task for the Czech Presidency is the finalisation of the « Fit for 55 » legislative package. Negotiations in the trialogues await us. I am pleased that the positions of the Council and the Parliament appear to be similar in most aspects so I believe that the negotiations will be successful. The climate package is very complex so we hope that we will be able to reach a compromise on as many of the proposals as possible. We see the political importance of achieving the Paris Agreement’s greenhouse gas reduction targets, both at national level and in relation to global partners.

In addition to climate protection, our next priority is to find a common ground between Member States on the new draft law on nature restoration. This long-awaited major milestone in nature conservation will ensure the restoration of damaged ecosystems. In this context, we would like to emphasise that promoting adaptation to climate change is of equal importance to reducing emissions.

In the area of the circular economy, we will work to complete negotiations with the European Parliament on the Battery Regulation. Other negotiations concern the revision of the Industrial Emissions Directive, as well as the Air Quality Directive, which we expect to be presented by the European Commission in autumn. These are also parts of the framework agenda of the European Green Deal, which is gradually being incorporated into EU legislation.

During the Czech Presidency, the Ministry of the Environment also wants to draw attention to the issue of light pollution which has been neglected at the European level.  The increase of light pollution is caused by excessive or inappropriate night lighting remains a serious global problem that negatively affects humans and living nature.

The Ministry will represent the position of the whole EU at two key international events of the year. The first is the UN Climate Change Conference COP 27 in Egypt where we will build on the commitments made in Glasgow and it will be necessary to find a concrete form of financial assistance for developing countries in order to decarbonise, adapt and repair the damage already caused by climate change.  The second is the United Nations Conference on Biodiversity, COP 15 which will take place in Canada, where a new Global Biodiversity Framework is to be adopted. The adoption of this ambitious new plan will require a compromise to be found between all the Parties of the CBD. Overall, we will have to represent the EU’s interests at more than two dozen international conferences during the Czech Presidency.

Environmental crises including climate change and biodiversity loss, can threaten employment, human health and social security. It is essential to promote the principles of circular economy and sustainability. Material consumption is constantly increasing so it is necessary to return waste materials to the economy, to motivate people to share and lend things, and to streamline processes in companies and governmental organizations. Minimising waste and reusing it, boosting the economy through digitalisation and streamlining logistics routes are challenges for the coming years.

The Ministry of the Environment has developed the Strategic Framework for the Circular Economy of the Czech Republic 2040, which enshrines the principles of the circular economy in the Czech Republic. The strategy aims to maintain the value of products, materials and resources for as long as possible in the economic cycle and return them to the production cycle at the end of their use while minimising waste generation.

The strategy seeks primarily to reduce the actual generation of waste to improve waste management by emphasising recycling (by promoting recycling technologies) and reuse, improving in particular bio-waste, textile, construction and food waste, packaging and obsolete electronics. The use of secondary raw materials is a priority for industry, construction and energy. The State will support in public procurement those companies that use products containing secondary raw materials and recycled materials.

By implementing these measures, the Czech Republic aims to improve waste management including positive effects on the achievement of national climate and other environmental targets. Improving security of material supply and reducing dependence on material sources imported from outside the EU as well as increasing the competitiveness of businesses.

Digitalisation represent a useful tool to accelerate the transition to a climate neutral, circular and more resilient economy. Our ministry already provides a number of widely used services that are in varying degrees of digitalisation.

For instance, applications for subsidies from the State Environmental Fund, applications for financial support under the New Green Savings Programme, reporting forms for the transmission of data on pollution of various environmental components (water, waste, air, etc.) or the transport of hazardous waste are fully digitised. These digital services are generally used more by businesses than by the general public.

Most of the environmental agendas such as the trade in endangered species of wild fauna and flora – CITES Register, have been satisfactorily digitised with a gradual increase in the convenience of digital services, e.g. in terms of simplifying logging in or sharing content data with other authorities. However new or renewed systems are also being developed at the Ministry of the Environment. Currently in 2023 we are preparing a new waste management information system in line with current digitisation trends.

The Ministry´s ambition by 2025 is to deploy a simple contact interface that will offer all relevant services to citizens and services in the field of the environment via a self-service portal on the web. Hence it will also be possible to carry out tasks that have not yet been able to be handled fully digitally such as obtaining certain types of certificates, certifications, authorisations, etc. The services of electronic environmental information portals for the general public are also being improved, in particular with a view to increasing the supply of open data.

Could you give us an idea about the important sectors and the most important Czech companies who play a strategic role in the environment?

Half of the 10 largest companies in the Czech Republic by revenue are from the energy sector, the others mainly from the automotive, chemical and food industry. All these sectors have a major impact on the environment and are also key to managing the green transition successfully. This is why companies are focusing on environmental activities such as investing in renewable energy, improving energy and material efficiency, reducing production and better use of waste, protecting natural resources or reducing traffic congestion.

The success of the companies is also due to the nature of the Czech economy, which is open and significantly dominated by exports. Economic growth over the last thirty years has been significantly driven by foreign investment, which is reflected, for example, in a greater willingness to invest in research. Importantly, foreign owners receive far more dividends and profits from the Czech Republic than Czech owners of companies and capital in general from abroad. The difference has almost reached up to CZK 300 billion a year.

Another important factor is the significant position of the automotive industry and its related supply chains, which will pose a major challenge to the socio-economic transformation associated with the Green Deal. A third factor is the concentration of emissions-intensive manufacturing, in particular iron, steel, lime and cement, which account for 45% of greenhouse gas emissions. I am therefore pleased that the Czech Republic is one of the first in the EU to start drawing money from the Modernisation Fund. The interest of companies in subsidies, especially for investments in renewable energy sources, is enormous.

The Ministry of the Environment also works closely with key players in the market. In July it concluded a Memorandum of Cooperation on Climate Protection, Energy and Some Related Areas together with CEZ, the second largest energy company in the country. Both parties will work together on the comprehensive decarbonisation of all segments of the Czech economy. CEZ wants to achieve carbon-neutral operation as early as 2040, the previous target was 2050. We are also preparing a similar memorandum with Škoda Auto, the largest Czech company.

The Ministry will seek to support companies in their transition to climate neutrality, especially in the construction of renewable energy sources such as photovoltaics and agrivoltaics. To ensure energy security and independence, we must transform the Czech energy sector towards clean energy sources that do not burden the environment with local emissions or CO2 emissions in line with the Green Deal for Europe.

5/ Could you give us an idea about the international collaboration of the ministry? Could you please name the specific projects?

The Ministry is working to strengthen its position on the European and global stage and to develop international cooperation. It is necessary to work across borders and sectors in the field of environmental protection. Therefore, we develop active relations with partner ministries of other countries, participate in the activities of international organisations, exchange experiences and implement international projects, conferences and seminars.

Recent examples include the Czech Republic’s contribution to the Global Environment Facility (GEF). In June it was increased by a record amount for the next four years, which will support large-scale initiatives aimed at tackling the loss of biodiversity and forests, improving the health of the oceans, combating pollution and reducing the impact of climate change. In spring we also supported the hosting of the prestigious World Environmental Education Congress (WEEC) in Prague.

I would also like to mention the signing of the Memorandum of Cooperation between the Czech Republic and Ukraine in July. We have undertaken to help Ukraine in solving long-standing environmental problems as well as remedying the effects of the war on nature. 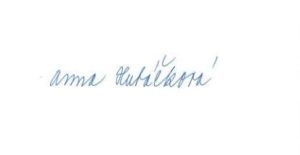