Renewable energies must be at the heart of our climate policies

The rational use of energy and the increased use of energy from non-fossil sources are two major assets of any policy aimed at reducing greenhouse gas emissions resulting from human activities, thus contributing to our climate policies.

Why, as is often said, is energy one of the key parameters of any climate policy?

Jean-Louis Bal. Most of the greenhouse gases responsible for climate change are emitted by fossil fuels. It is therefore essential if by the end of the century we want global warming to increase by two degrees, to drastically reduce the share of fossil fuels in the global energy mix. Given their maturity, their competitiveness and their diversity, renewable energies are now able to replace, in many countries, fossil fuels.

The work of the International Energy Agency (IEA), carried out four years ago, showed that renewable energies could contribute to at least a 25% reduction of GHG emissions by the end of the century. If we repeat the exercise today, this percentage would be even higher, given the significant progress made over the past four years by solar photovoltaic and wind power, considered today as two of the most competitive energies with solar energy. hydroelectricity. Historically, renewable energies have emerged and developed in OECD countries where they received public support. At present, the emerging countries have taken over: China, India, South Africa, Brazil … have significant needs for energy and, in particular, for electricity, linked to their growth; they invest in hydropower, wind power and photovoltaic solar energy, actively contributing to the development of these markets. The renewable energy sector employs 7.7 million people worldwide.

In France, it represents 100,000 jobs and will double tomorrow, if our country gets underway to achieve the goal of 23% of the renewable energy it has set for 2020.

As you have pointed out on a number of occasions, France will have a hard time meeting the 2020 European targets for renewable energies; can you explain this delay?

J-L. B. The European Union aims to meet 20% of its final energy consumption by renewable energies by 2020. This ambition represents 23% for France. Even if we have exceeded the 14% mark, the goal of 23% will be difficult to reach by 2020. Why such a situation? Several reasons: one of them lies in the administrative framework applicable, in particular, to wind energy. Today, it takes on average 7 to 8 years to complete the installation of a wind farm, when it takes 4 years in Germany. The situation is identical for hydroelectricity and methanation. Elsewhere in France, various renewable energy sectors have suffered sudden changes. Thus, if the conditions for the development of solar photovoltaic were met before 2010, the year 2011 was a handicap to the sector. After lowering the electricity purchase tariffs, the Government decided that only installations on buildings of less than 100 kWp would be affected by electricity purchase tariffs by EDF, those over 100 kWp and ground-based power plants being tendered. These have been very irregular in recent years and focused on insufficient volumes.

On the other hand, certain schemes, such as the Heat Fund managed by ADEME, which has benefited from biomass heat production since 2009, are fulfilling their objective. From 2009 to 2014, 1.2 billion Euros were thus contributed to the projects developed in the field and made it possible to replace fossil fuels with 1.5 million tonnes of oil equivalent, mainly from wood energy and geothermal energy. The mechanism works well, but it is necessary to increase this boost of the state, as decided Ségolène Royal, Minister of Ecology, Sustainable Development and Energy. For wood energy, there is also a need to improve the wood supply. If we have in France, with the third forest of Europe, an important resource, it is still necessary to help the forestry sector to structure itself. And we are happy that, since this year, part of the Heat Fund is dedicated to this structuring; the call for projects launched by ADEME on this subject met with a broad response. This is a positive sign.

What do the professionals in the renewable energy sector expect from COP 21? 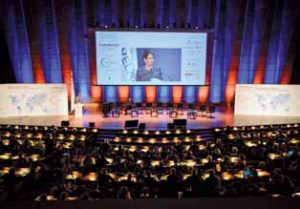 J-L. B. In December, if the 195 member countries of the United Nations can agree on the objectives to be achieved, for such a resolution – limiting global warming to 2 ° – to bear fruit, in practice, it will still be necessary to give a price to carbon. This will change economic behaviour and favour the best uses of energy and further develop renewable energies.

France will have a hard time meeting its 2020 targets for renewable energy. Does this mean that it will not reach the European target of 27% by 2030?

A major response document to this question is the law for energy transition and green growth, the final adoption of which is expected shortly; the measures it contains make it realistic to increase our renewable energy mix to 32%. This requires the establishment of a legal, fiscal and favourable regulatory framework. We will carefully study the documents that will specify the content of the law. The challenge is to achieve a multi-annual energy program, with a specific approach for each sector by 2023, with the possibility of revision in 2018, and allocation of public resources through mechanisms such as the Heat Fund, the tax credit or the CSPE.

In the spring, the French Environment and Energy Management Agency (ADEME) carried out a study on an electric bouquet entirely composed of “green” resources by 2050. What is the data to be considered in this area?

In France, the physical deposit allows it, whether wind or photovoltaic. Beyond that, it is also necessary to balance the electric system minute by minute, which is an important issue, given the variable nature of renewable energies.

The answers for doing so are in energy storage and what we call “smart grids”. The ADEME study to which the SER, like other actors in the sector, has been associated with, is not predictive, as it does not set scenarios. But programming is important. For example, the Regional Climate Air Energy Schemes created by the Grenelle Laws and co-piloted by the Regional Prefect and the President of the Regional Council, issue at regional level, some of the European legislation on climate and energy, with objectives to both quantitative and qualitative. They allow RTE, the manager responsible for electricity transmission, to program the connection to the grid of renewable energy sources and to avoid grid saturation.

Are the positive energy territories provided for in the law for energy transition and green growth an interesting device? what are the best ways to analyse them?

J-L. B. This is an interesting scheme, which will benefit from the Heat Fund. But it is not a question of producing energy locally by aiming for the autonomy or the autarky of neighbourhoods, cities or territories, in this domain. Much of the renewable energy field is in rural areas. However, it is in cities and dense urban areas that energy needs are the most important. It will, therefore, be necessary to pool the resource, by sending back on the general network the electricity produced.