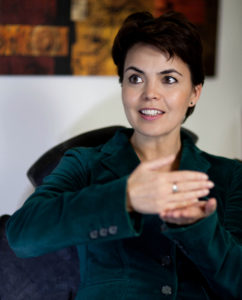 Could you talk to us about the European Commission Representation in Romania, your missions and skills?

One of our main objectives is to contribute to the implementation of the Commission’s political priorities. We carry out this mission from communication activities towards the Romanian public, on the one hand, and monitoring and reporting on our services in Brussels. (For more details on our activities and fields of action, we invite you to consult our internet page: https://ec.europa.eu/romania

What are the major activities that have been carried out in recent years?

With regard to communication with priority target groups, we organize specific actions for different groups.
For the parties concerned (professional groups, civil society, etc.), we hold annual conferences and debates on topics of major importance at European level and on the political priorities of the European Commission. They are called “Here, Europe”, a title adapted to any region in Europe and, in addition, for Romania, which is a fairly new Member State.

For the potential beneficiaries of European funds, we have organized several editions of a European funds caravan, which sets up meetings in each macro-region of the country with beneficiaries of European funds so that they can have the opportunity to exchange their experiences, as well as a gala to reward the best projects entered in a competition associated with the caravan. We regularly visit ambassadors from other Member States, who have projects implemented with European funds in the country. For journalists and bloggers, for years now we have been organizing regional seminars, the “Reporter / European Blogger” competition, and visits to European institutions in Brussels or work placements as press correspondents to the Commission. For students, we organize every year the “Europe, our home” campaign with hundreds of schools through a national competition of general knowledge on the European Union called the “Euro quiz”.

We also carry out “public” actions either directly or with the help of our local Europe Direct information network, which is present in almost 30 localities in the country. Europe Day, May 9th, remains one of the great annual communication opportunities for our representation. This year, because it is the country’s centenary, we celebrated Europe Day in “the country’s other capital”, the capital of the great national union of 1918, in Alba Iulia. For two whole days, we organized several events, among which the 5th edition of the Cross of Europe, which is a competition for amateur athletes, as well as a dialogue with the citizens with the participation of the Minister Delegate for European affairs.

In previous years, we have also organized major public events, such as “UrbanFest or RuralFest”. The first was a festival of sustainable urban development, aimed at promoting European values in the mentioned area. The second was a fair for producers and artisans, including demonstrations of traditional crafts, presentations of organic products, natural and ecological, to highlight the contribution of the European Union through the Common Agricultural Policy, for food and the promotion of country-specific traditions. We also organize regular citizen debates with the commissioners who visit Romania, so that they can listen to the constraints and expectations of EU citizens.

What are the strategic sectors in Romania in which your next actions will be carried? And why?

Romania is preparing its first Presidency of the Council of the European Union, which will take place in 2019, at the time when EU leaders will discuss the long-term vision of Europe, after the exit of the United Kingdom. The process is called “The Way to Sibiu / Road to Sibiu”, because the conclusions of this great debate will be adopted in a summit of heads of state and government, which will take place in Sibiu, Romania, on May 9, 2019. This vision will be important not only for Romania but for Europe as a whole. We want to prepare this summit by organizing a mirror summit of the citizens of the 27 member countries, in collaboration with the Romanian authorities. It will take place towards the end of 2018 and the participants will be able to draw up their own agenda for the future of Europe.

As far as Romania is concerned, we will strengthen our collaboration with the Romanian authorities, including through European funds, to ensure sustainable, inclusive and smart economic growth in the country. The main goal is to reduce differences in standard of living compared to the rest of the EU. This is clearly visible in large cities, but rural areas will be the ones that will benefit most from inclusive economic and social growth. We support the country’s efforts to adopt the Euro, which should take place before the end of 2019. We follow with great vigilance cooperation and verification mechanisms in the field of justice and the fight against corruption.

As for communication, we will continue to develop the Commission’s global communication campaigns in Romania, such as the one on the Investment Plan for Europe (Invest EU), or the one targeting the young citizens of Europe (EU and Me). The goal will always be to make known to the local public the opportunities offered thanks to the membership of the European Union.

Finally, on the eve of the major European elections, what message would you like to address to Romania, to Romanians and Europeans in Romania?

A sense of optimism about the future of the European Union is predominant in Romania, 65% of the population has a positive image of Europe compared to the European average of 58%. In a sometimes difficult context for citizens, 52% of them remain confident about the European institutions.

My message is: “The future of Europe belongs to you, I invite you to invest yourself and actively involve yourself in the construction of Europe, the next European elections, in May 2019, are a great opportunity to do so!” My hope is for Europeans to use this opportunity to express their voices and their choices and ensure that they will be represented at the most democratic institution in the EU, the European Parliament.