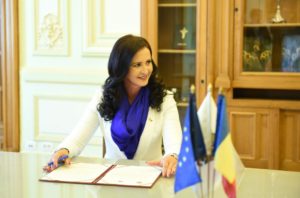 Romania is a profoundly pro-European country, both at a political and social level. Since becoming a member of the European Union, Romania has undergone a period of modernization and socio-economic development, aiming to improve the quality of life of its citizens.

There are millions of Romanians who work, travel or study in the European Union and who are firmly attached to European values such as peace, democracy, solidarity and respect for other cultures.

Romania, along Finland and Croatia, will be at the heart of European decision-making, playing a key role in strengthening cooperation between the Member States of the European Union in the context of Romania’s preparations for the presidency of the Council of the European Union in 2019 with the six-month mandate starting with January 1, 2019 which is a first for our country.

Romania has gained enormous benefits from accessing European funds and will continue to do so. The European funds attracted by Romania are a major source of investment, job creation, recovery of development gaps and rising quality of life for Romanians for the next period by contributing to the creation of new jobs, support for small and medium enterprises, and many other projects in various fields.

My vision for Europe and our country implicitly, is set to be a highly democratic one, which has all the prerequisites to become a space for the active promotion of European values, a space oriented towards unity and democracy. Lately, we have witnessed a series of events that have divided us and fractured our country and EU, and that is why I urge the Romanians to keep their faith in the system and to keep in mind that no matter the changes, Romania is making efforts towards its growth and cohesion within the European Union in an environment where the key words should be solidarity, cohesion, equal opportunities and social justice.

Our Ministry focuses on developing a stronger connection with all our Romanians everywhere, thus our programs and initiatives strive to offer them both financial aid in materializing projects directed towards maintaining their national identity, but also information about what opportunities they have in our country. As such our purpose is double folded. On one hand, we want to help our Romanians better integrate in the societies where they live, learn and work, while maintaining a strong bond with their heritage and on the other hand, we want them to be better informed and support them if they decide to return to Romania. Moreover, I have recently noticed, during the meetings I have had with our communities abroad, that there is a tendency among Romanians to return home. Encouraging this tendency is an important priority for the Romanian Government, as it is for Governments of other EU states who are confronted with the same phenomenon.

Every single Romanian abroad is important and, as I often say, each Romanian who chooses to live, study or work abroad represents a loss for Romania. We are living in a globalized world and we are part of the European Union, where the free movement of people and services is one of the most important pillars, which is essential for growth, yet, we are highly aware of the consequences on a social, cultural and demographic level.

Thus, the mandate that Romania will have as the leader for the Council of the European Union will be a great opportunity for our Ministry to further emphasize the value and significance that Romanians bring to their communities everywhere, but it will also be a chance for other countries facing similar issues to give voice and outmost consideration to their priorities in this area.

About Natalia-Elena Intotero and the Ministry for Romanians Abroad > HERE