You are the Vice President of the New Aquitaine Region, from your point of view what is the role of regions in Europe’s future?

The role of the regions is fundamental to Europe’s future, since 2014, the regions manage the European structural funds. It’s the cohesion policy, these budgets are one-third of the budget of the European Union; they are absolutely colossal amounts of euros that affect all our territories. There is really this contact, this mediation of regions in relation to the decisions of Brussels or Strasbourg and what is happening on the ground.

This is because we are the ones who know best where to invest, how to invest, and who to support based on our key regional priorities.

You chair the working group of the European Committee of the Regions on the budget of the Union, you are also a member of the CPMR; what’s the role and the added value of these organisations in the European debate?

This is an added value that is growing especially because of the public opinion problems throughout Europe and the rise of Euroscepticism. I would say that we are sensors for the Commission, since the Commission, which tended to directly propose a certain number of proposals to the Council which proved to be unpopular, more and more today we consult upstream of the drafting of their projects in order to gather our opinion. We represent the territories and are able to express the opinion of the citizens.

What is your opinion on the first trends in the budget proposed by the Commission this morning? 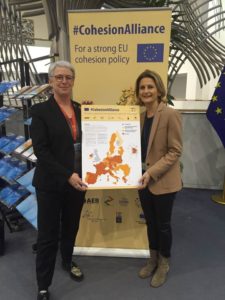 So there were first scenarios announced by the Commission on February 12 or 14, which were absolutely unacceptable. A pure provocation with three scenarios, two of which excluded a large number of regions from this cohesion policy which is already a major intellectual anomaly, since the cohesion policy must be universal by definition and addressed to all.

If you start to unravel Europe by saying you are contributing but there are only some countries that are entitled to this help then we are heading towards a sure-fire disaster.  These proposals were totally unacceptable with even 30% reduction assumptions in the cohesion budget.

Are you satisfied with this minus 5% on the cohesion budget?

Of course not, even 5% reduction is absolutely unacceptable; we have a big need for investment in the European Union and in each of our regions. We observe that territorial inequalities are increasing and these disparities must really be borne by European cohesion funds. These funds are used for this purpose.  We need to pay particular attention to all our territories, and to ensure a balance between the metropolises that create wealth and the more rural territories that need this wealth to develop over the entire territory.

We take charge, for example, of the economic development of SMEs – they are not all located in Metropolitan France, and this economic fabric that we know well can be supported by these cohesion funds. Thanks to these funds, we can support small farmers, support the creation of laboratories, fight against territorial inequalities. This struggle is fundamental and the European cohesion policy helps us to do this. We could not do it without the EU, surely not so well!

You said that last October when you were appointed the chair of the European Committee of the Regions working group: “we will ensure that the future multiannual financial framework preserves structural funds that irrigate our regions, our provinces and our cities”.

How are you going to do it?

Yes, it is indeed a showdown, however, we had the satisfaction this morning following the intervention of our parliamentary colleagues to see that we are exactly on the same wavelength. MEPs Jan OLBRYCHT and Isabelle THOMAS prepared reports on the future of the budget in the next multiannual financial framework.

We are talking about 2020 and the next seven years, what will be the budget requirements?

Their position, which we fully share in the Committee of the Regions, is that the overall budget must be increased by 1.3%.

Only then can we face the new skills we give ourselves, the new ambitions that we give ourselves. Everyone wants more solidarity, everyone wants the defence to become European, to welcome refugees with dignity, to put the package on the climate plan, border security. It’s good, we must and will face new challenges, but that can’t be to the detriment of the cohesion policy that has proven itself and is absolutely necessary.

We can not talk about competitiveness, innovation and territorial equality if we begin to draw money from the cohesion or CAP budget, thinking that in any case, we have to finance the new challenges. I say yes to the new challenges, but not abandoning the traditional policies that make the heart and sense of the political action of the European Union.

Will the fight really start after May 2nd?

Yes and no, the financial framework of the upcoming budget will be published 2 May by Commissioner Günther OETTINGER; it will indeed be the beginning of the negotiation. But it is a very important document and we know that when it is written, it is difficult to find real room for manoeuvring because the Member States have already given more or less their opinions on the subject. That is why we are already fighting before its publication to defend and imply that cohesion policy should not be sacrificed.